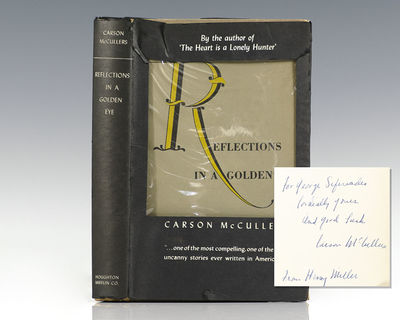 by McCullers, Carson [Henry Miller, George Seferis]
Boston: Houghton Mifflin Company, 1941. First edition of the author's classic work. Octavo, original cloth. Association copy, inscribed by the author on the front free endpaper, "For George Seferiades Cordially yours and good luck Carson McCullers from Henry Miller." The recipient, George Seferiadis, the veteran Greek diplomat and scholar who as George Seferis the poet won the Nobel Prize for literature in 1963, was a liberal thinker who inherited a strong democratic tradition from his family. His pen name, a shortened form of his family name, reflects what his friend the British poet Rex Warner called his fondness for "innocent, easily penetrable disguises." It also emphasized his role as wanderer, since sefer is rooted in the Arabic word for journey, emerging in Swahili as safari. The announcement of the Nobel Prize for his poetry was made in October, 1963, and Mr. Seferis received the prize personally in Athens that December. A year later, he was made an honorary Doctor of Literature at Oxford, and the following year Princeton awarded him an honorary degree. In 1966, Seferis became a foreign honorary member of the American Academy of Arts and Sciences. Seferis and fellow writer Henry Miller were close friends and Miller had this copy inscribed by McCullers as a gift. Very good in a very good first issue dust jacket. An exceptional association copy, linking three great writers of the twentieth century. Reflections of a Golden Eye immortalized by the 1967 film starring Elizabeth Taylor, Marlon Brando, and John Houston. Set on a Southern army base in the 1930s, it tells the story of Captain Penderton, a bisexual whose life is upset by the arrival of Major Langdon, a charming womanizer who has an affair with Penderton's tempestuous and flirtatious wife, Leonora. Upon the novel's publication in 1941, reviewers were unsure of what to make of its relatively scandalous subject matter. But a critic for Time Magazine wrote, "In almost any hands, such material would yield a rank fruitcake of mere arty melodrama. But Carson McCullers tells her tale with simplicity, insight, and a rare gift of phrase." Written during a time when McCullers's own marriage to Reeves was on the brink of collapse, her second novel deals with her trademark themes of alienation and unfulfilled loves. (Inventory #: 127428)
$9,500.00 add to cart or Buy Direct from
Raptis Rare Books
Share this item