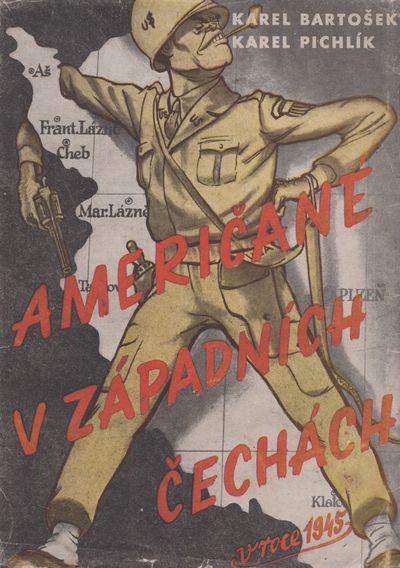 by Bartošek, Karel and Karel Pichlík; Lev Haas, artist
Prague: Mladá fronta, 1953. Octavo (21.3 × 15 cm). Original pictorial dust-wrappers by Lev Haas over blind wraps; 219, [4] pp, [26] leaves of plates and color frontis illustration. Light soil to wrappers, especially rear wrapper, else a very good copy. First, greatly expanded and illustrated edition of a text published originally in 1951 under the title "The shameful role of American occupiers in Western Bohemia" ("Hanebná role amerických okupantů v západních Čechách"). The book describes the arrival of US troops during the final days of World War II and the Americans' hostile attitude toward the pro-communist sentiment on the ground. Based on archival documents and eyewitness reports, the book recounts the struggle of Czech people's councils with the American powers, as well as other ways in which the local population reportedly suffered under American presence and the "American way of life", which is here depicted as particularly despicable in strikingly propagandistic and Anti-American manner (such as a boxing match held on an intersection and therefore interrupting traffic, or the lewd pictures printed in news bulletins for American soldiers in Bohemia). The book is illustrated with numerous plates on better stock, which depict supposed American bombings of civilian objects, American occupation broadsides, examples of American "cultural" imports, and many historical documents in local archives.

The cover design was by Lev Haas (1901-1983), a leading interwar graphic artist who had trained at Karlsruhe and Berlin and was active in Vienna and his native Opava. After his arrest in 1939 for membership in the Communist Party, he was sentenced to forced labor, before being sent to the Theresienstadt Concentration Camp, where he was forced to create pro-German propaganda material, while secretly documenting life in the camp along with other artists. After being accused of smuggling artwork out of the camp, he was tortured and moved to Auschwitz and Sachsenhausen, where his skills were used to forge British bank notes as part of "Operation Bernhard."