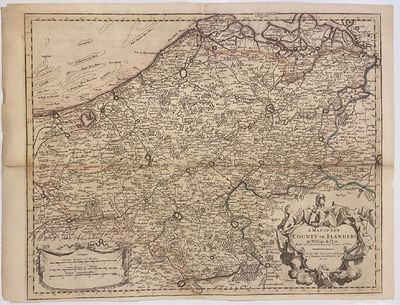 by DELISLE, Guillame
London: John Senex. unbound. Map. Engraving with hand coloring. Image measures 24 1/2" x 19 1/4". Beautiful map of Flanders circa 1715, extending from Brussels and Antwerp in the right margin, to Saint-Omer (present-day France) in the west. The map is colored to show regional borders of the time. Shows roads, rivers, and forests; towns and cities are extensively labeled. A decorative cartouche in the lower right corner attributes the map to William de l'Isle, member of the Academy Royal of Sciences at Paris, and reads "Sold by John Sesex at the Globe..." Published in "The Universal Geographer, or, A compleat atlas containing all the known countries in the world." Professionally reinforced along original fold lines; minor toning along horizontal fold. Guillaume De L'Isle (1675--1726) was a French cartographer known for his popular and accurate maps of Europe and the newly explored Americas and Africa. He is important as the first "scientific" cartographer who incorporated the most current information on exploration and topography into his maps. John Senex (1678-1740) was a kind of Renaissance man of the 18th-century map world, working at times as a scholar, surveyor, engraver, astrologer, book seller and publisher of maps, atlases and globes. In a short period, he developed from an apprentice into one of the most important cartographers of the period and became a Fellow of the Royal Society of London, as well as Official Geographer to Queen Anne of Great Britain. Although well regarded for his pocket-size maps, Senex is probably best known for his globes, which display a knowledge of astronomy equal to the skill of their craftsmanship. After his death in 1740 his wife Mary continued his business and continued to produce and sell cartographic works of high quality. Together, their work represents a successful and valuable partnership in 18th-century map making and publishing. (Inventory #: 301379)
$350.00 add to cart or Buy Direct from
Argosy Book Store
Share this item

Columbus Reception by the King Ferdinand and Queen Isabella of Spain

New York : H. Schile , 1870
(click for more details about Columbus Reception by the King Ferdinand and Queen Isabella of Spain)

Survey of India , 1955
(click for more details about Tourist Map of India: Central Region (Madhya Pradesh and Orissa))
View all from this seller>