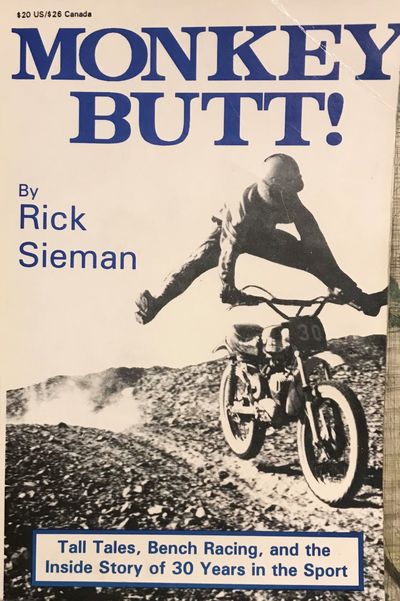 by SIEMAN, Rick
Lomas de Rosarito, Baja, Mexico:[2003]: Rick Sieman Racing. First Edition. Signed by Sieman on the front endpaper. A scarce book! Rick Sieman's life-long love affair with motorcycles started in 1959 with the purchase of his first bike. After four years in the service, Sieman held various jobs and competed in Olympic weight lifting. He renewed his interest in bikes and competed in drag racing, scrambles and enduros. In 1968, he headed for California with a 1965 Bultaco Metisse strapped on the back of his station wagon. A career in journalism followed. First Dirt Bike Magazine, then Modern Cycle, then back to Dirt Bike, then Off-Road, followed by Old Bike Journal and Off-road.com. Highlights of his racing career include three Number One plates in District 37 motocross- 1984, '85 and '86. In 1986. He won Class 14 in the SCORE Baja 1000 at the wheel of an Isuzu Trooper. Since then, he competed as a professional off-road racer in Class 3 and Class 4 in a Ford truck. His dirt bike racing is limited to a few vintage events each year. Thick 8vo., pictorial wraps; 640 pages. Illustrated.. Very Good (minor wear with light crease top corner front cover; contents clean & tight). A nice copy. (Inventory #: 57485)
$150.00 add to cart or Buy Direct from Antic Hay Books
Share this item
Antic Hay Books
Offered by