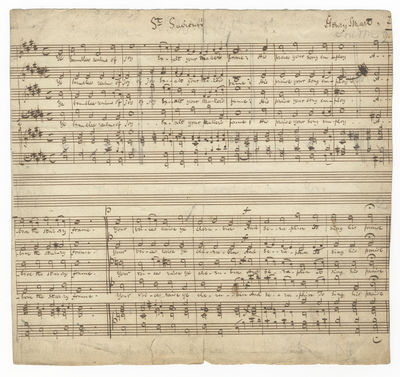 signed
by SMART, Henry Thomas 1813-1879
Oblong quarto. 1 leaf. Two 4-part vocal settings of the hymns "St. Saviour" and "Blackburn." With organ accompaniment. Notated on recto and verso in dark brown ink on rastrum-ruled paper. Signed by the composer at the head of each work. 235 x 255 mm.

Blackburn: 17 measures in G minor. With markings in pencil. Text commencing "Why hast thou cast us off, O God?"

Somewhat soiled; creased at central fold; tears to lower margin; cut down from a larger leaf with minor loss to signature and clefs. Both hymns apparently unpublished.

Henry Thomas Smart, member of the noted English family of musicians, was an organist and composer, son of the violinist Henry Smart (1778-1823), and brother of Sir George Smart (1776-1867), distinguished conductor, organist, and composer.

"From 1831 to 1836 [Smart] was organist of Blackburn parish church, and his first anthem was performed there ... In 1836 he settled in London as organist of St. Philip's, Regent Street ... In March 1844 he was appointed to St. Luke's, Old Street, where he remained until 1864 ... Smart was an excellent organist ..., a splendid extemporizer and a voluminous and admirable composer for the instrument, and became the leading concert organist in the country. His expertise in organ design was valued by many. Among the most important instruments he designed were those in the City and St Andrew's halls, Glasgow, and the town hall at Leeds. He was a pioneer in developing the English symphonic organ on French principles." W.H. Husk, revised by Nicholas Temperley in Grove Music Online. (Inventory #: 36582)
$715.00 add to cart or Buy Direct from
J. & J. Lubrano Music Antiquarians
Share this item