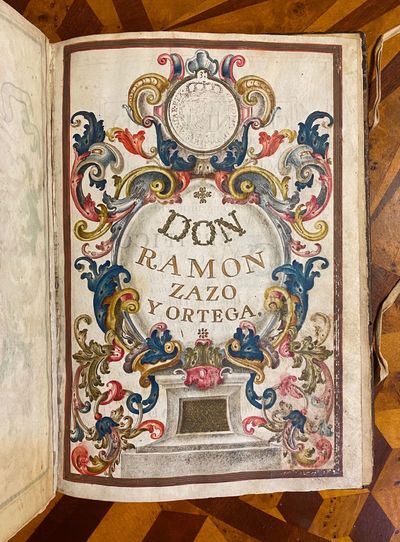 Carta executoria are significant not only as historical documents, but as objects of the Book Arts, often written calligraphically on vellum (as here), and featuring varying degrees of illumination. "Carta Executoria both established noble lineage and served as tangible evidence of nobility, which had tremendously practical implications beyond social standing. During the early modern period in Spain the nobility and the clergy formed an estate far removed from the rest of the population. The property of the nobility was exempt from taxation and protected from civil suits. Nobles could not be imprisoned for indebtedness, or tortured (except for treason), and if sentenced to execution had the option of decapitation rather than hanging. The proportion of the population which could make a claim to nobility varied by geography - in the north as much as fifty percent of the inhabitants could claim noble blood, whereas in the recently conquered south, the nobility was no more than one percent of the population." (Source: Tarleton Law Library Highlights, online exhibition).

On the second leaf, incorporated into the illuminated border, is the ink stamp of the Spanish goverment under Carlos III, approving this Carta Executoria. The manuscript still retains the paper seal of the City of Madrid and bears multiple signatures. (Inventory #: 3541)
$1,500.00 add to cart or Buy Direct from
Michael Laird Rare Books
Share this item