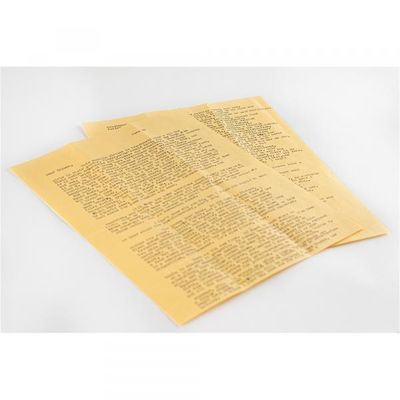 signed
by Salinger, J.D.
Salinger, J.D. American author of The Catcher in the Rye.Typed letter signed "Jerry" and with two hand-written pencil corrections. 2 pages. Dec. 23, 3 PM [1971]. To Eileen Paddison, a boarding-school girl and aspiring writer who struck up an unlikely lifelong friendship with the author, and over time became the recipient of some of his most personal confessions. A long and intriguing letter, in which the reclusive author admits he understands what she is going through, grappling with a mixed identity, and finding his escape in boarding school, "Boarding schools have a bad name, but they oddly suit some kinds of kids." It was Salinger's boarding school experience coupled with intrinsic alienation that formed the basis for his most acclaimed novel, The Catcher in the Rye. Also with content on his hatred of stealing and intense love of privacy-two factors which would dominate the second half of his life as Salinger withdrew from the limelight and aggressively punished infringement on his intellectual property.

Salinger's letters to young Eileen Paddison express a kinship that exceeds every other correspondent, including romantic partners and family. I this letter, he is particularly open, and also elucidates how the similarity in their lives that led him to feel "a gigantic comfort" in her friendship. As well as both being boarding school kids, Salinger found it "extraordinary" that the two share the same unique combination of half-Irish, half-Jewish backgrounds. He posits whether his intense dislike of privacy loss is one of the results, and whether she experiences the same thing. The layers of coincidence led him to wonder if the two might be connected on even deeper levels,"You weren't by any chance born on Jan 1st, too?"

In a burst of personal insight, Salinger reveals that his own "significant mixtures in lineage" may be the basis for Holden's troubled nature. "In my day, when it wasn't a burden - or worse, an onus - it was... a mixup in identity...psychological or social..." All in all, the effect was "a fairly rotten form of self-consciousness."

The precocious teenager who received this letter was just over the age of Holden, and the same age as Salinger had been during his stint in boarding school. It was a time that left an indelible mark on Salinger's life, which he recalled in perfect detail as he wrote about the petty dramas of school children years later. He commiserates with Eileen, "Sorry things went wrong with your roommate...Is the basement room all right? Not damp? Dark?" He comments on the amount of "old-fashioned horse's ass" in young men, and how he can't stand stories about stealing, which tend to depress him. This, as well, he chalks up as a "throwback to my own boarding-school days." Interesting, that his reaction is sadness, rather than moral indignation, and very much in keeping with Holden's reactions when confronted with human failure. This reference to boarding school also adds a note of interest for Catcher enthusiasts.

Though rare for the reclusive author, Salinger deems to comment directly on his own fiction in this letter, confessing how it "amused hell out of me" to write the car scene in "Raise High the Roofbeam, Carpenters" (1955). And he talks about the fact that he is still writing; a fact of particular importance because as of the date of this letter, Salinger never allowed his newly written work to be read by another person. To this day, a decade after the author'sdeath, Salinger's later work remains a mystery.

Also discussed in this letter are his past bad experiences with letters, which make him fearful for his privacy. His ruminations on "shady switches in property" within this letter are relevant to the author's ferocious defense of his intellectual property rights, going after unauthorized publishers as well as would-be film adapters of his work. On the author's usual goldenrod paper with light mailing folds. Original mailing envelope in type bearing the author's P.O. Box return address in Windsor, VT, and with handwritten annotation "Airmail." An insightful personal letter, also with content on time spent with his children; his happiness that he can give them a carefree childhood and noting as they settle down to an "old and good spy movie, a Hitchcock done before the war...". (Inventory #: 17194)
$15,000.00 add to cart Available from
Share this item
Max Rambod Inc.
Offered by