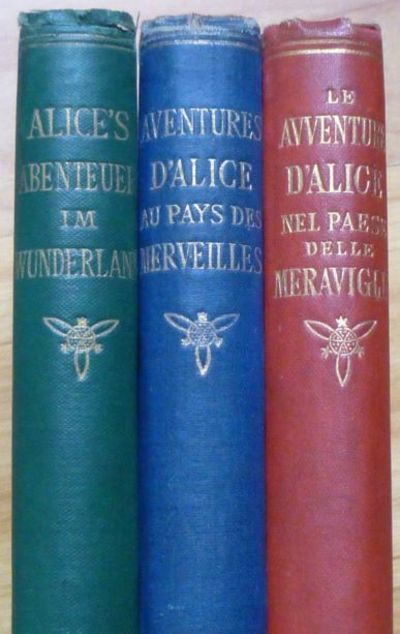 Macmillan of London published the original (English) edition of ALICE in 1865, but the John Tenniel illustrations were not well-enough printed, so the vast majority of those copies were sent to the US where they were equipped with an 1866 Appleton title page; also in 1866, a new UK printing with better illustrations was effected. In 1869, Macmillan published this German-language and this French-language edition, and in 1872 (the same year as the first edition printed in the US) they published this Italian-language edition -- all bound in the same gift-binding style as the original UK edition, with gilt vignettes on each cover (Alice and the pig on the front, the Cheshire Cat on the back) and with all page edges gilt. All of the original Tenniel illustrations appear in these editions as well; as one can see by the paginations shown above, each of these books is a different number of pages. Specifically: ALICE'S ABENTEUER IM WUNDERLAND. Uebersetzt von Antonie Zimmermann. Printed by a Leipzig printer but bound by Burn & Co. in the UK, this edition was published in February 1869 -- the first foreign translation of ALICE; the probable reason for the Leipzig printer is that the entire volume is printed in Fraktur font, the old-German style of print (which was discontinued -- forbidden, in fact -- by the Nazis in 1941). This is a copy of the first issue, with Macmillan on the title page (rather than a publisher in Leipzig). According To WM&G, "The reproductions of the woodcuts in this German edition are excellent, and bear comparison with those in any other issue of ALICE IN WONDERLAND. In the list of contents the pagination of the English edition has been carelessly reprinted, so that for every chapter except the first it is incorrect!". WM&G indicates red cloth with dark blue endpapers, but this is in error: all copies we have seen are in this green cloth with coffee-brown endpapers. This volume bears the bookplate of William Hartmann Woodin (1868-1934), a Pennsylvania industrialist and Republican who in 1933 served as Secretary of the Treasury under FDR -- beginning on March 4th when FDR took his oath of office, and ending on December 31st when Woodin resigned due to ill health (he died five months later). (Woodin also wrote music -- such as a march for Roosevelt, and (as Will Woodin) the music for Johnny Gruelle's "Raggedy Ann's Sunny Songs.") AVENTURES D'ALICE AU PAYS DES MERVEILLES. Traduit de l'anglais par Henri Bué. Actually printed in the UK by R. Clay & Co. and bound there by Burn & Co., the French edition (published in July or August 1869) has no issue points, but some copies read "Macmillan" at the foot of the spine and some (like this) do not -- no known priority. Blue cloth with coffee-brown endpapers, as is standard. LE AVVENTURÉ D'ALICE NEL PAESE DELLE MERAVIGLIE. Tradotte dall' Inglese da T. Pietrocòla-Rossetti. Published in March 1872, the Italian edition (like the French) was actually printed and bound by Clay and by Burn in the UK. This copy is of the first issue, with Macmillan on the title page and in this gift binding; a later issue had a Torino publisher on the title page, in a much simpler binding. Although WM&G says "The reproduction of the [wood]cuts in the Italian ALICE is far from good," nonetheless the Italian edition (alone with a Spanish edition) made the effort to translate words and prices within the woodcuts into the appropriate language: thus "Drink Me" in the page 10 woodcut is replaced with "Bevi", and on the ticket on the Mad Hatter's hat (on pages 95, 101 and 166), "In This Style 10/6" has morphed into "Prezzo fisso 12". WM&G gives the cloth color as bright red, but this copy has certainly always been more of a salmon-rose; it has dark-grey endpapers, as is standard. All three volumes are bright and near-fine. There is minor cracking of some endpapers, the German and French editions have light wear at the spine end(s), and the German edition has some foxing around the outer margins of its Leipzig leaves. Williams Madan & Green 71, 73, and 85. Housed in a (slightly worn) morocco-backed slipcase with inner chemise. (Inventory #: 14804)
$5,250.00 add to cart or Buy Direct from
Sumner & Stillman
Share this item

1900
(click for more details about LORD JIM. A Romance)