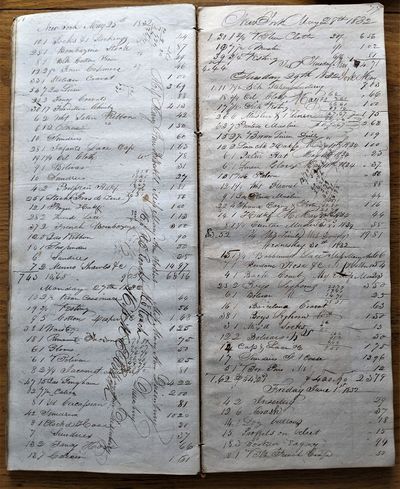 by Smith, William H.
New York, 1831. Tall folio. 390 x 160 mm., [15 ½ x 6 ½ inches].. Manuscript in ink.  258 pp. Original leather backed boards with calf spine; worn but sound and attractive.  Pastedowns and fly leaves filled with script and doodles.
W. H. Smith operated a dry goods store at 110 Canal Street in New York City during the boom times in New York City.  He was selling goods to the women of New York at the same time that Lord & Taylor and Brooks Bros. were establishing their growing retail business.  Canal Street, Catherine Street and Broadway were the center of the clothing trade and William Smith carried an inventory of goods for sale that rivalled the best the larger firms had to offer.
The entries in this ledger include the date and the amount and price paid for goods. For example; "Sept 4th, 1831 3 muslin for shirts .35 cents" Types of goods and cloth vary from white cotton hose, Prussian shawls, calico, belt ribbon, flannel, worsted wool, English bombazine, lamb's wool, cambric, pongee, and crimson circassian" to name some of the items listed in the sales book.  A handkerchief sold for 16 cents, and black worsted socks were 25 cents. Some of the more expensive items sold were garments made from English wool, merino wool priced in the 10 dollar range, while Italian silk was priced around 7 dollars.  Sales ranged from $11 to $58 a day.
The book has random doodling throughout though with no loss of legibility. Customers are occasionally named, such as Mr. Kellogg, Lewis W. Miller, Mrs. Durant, Samuel H. Hanson. A note was made of the exact date of the move to 110 Canal St, Thursday Oct 11th, 1832. A doodle on the flyleaf; "New York Jan 29th 1833 Sold 12 yds blk Florence after about 1/2 an hour's talking & coaxing- oh what hard work". Under that is written "I guess it was!" and "Keep me clear from Dry Goods & a scolding wife". . (Inventory #: 884)
$450.23 add to cart Available from
De Simone Company
Share this item
De Simone Company, Booksellers
Offered by