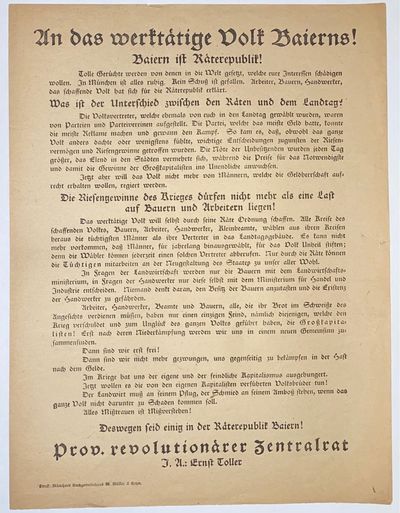 by Toller, Ernst
Munich: M. Müller & Sohn, 1919. 9x12 inch broadside, paper evenly toned, couple of short, unobtrusive closed tears at right edge, very good. A lovely example of this proclamation issued under Toller's name on behalf of the Provisional Revolutionary Central Council of the short-lived Bavarian Soviet Republic. Undated, but the example illustrated in "Sammlung von Flugblättern betreffend die Münchener" has a penned date of April 13, 1919. Toller had replaced Ernst Niekisch as head of the Central Council on April 8. "To the working people of Bavaria! Bavaria is a Soviet Republic! Great rumors are circulated by those who seek to harm your interests. Everything is calm in Munich. No shots were fired...." Outlines problems with the pre-existing electoral system, promises a new regime of workers' councils. "The farmer has to stand by his plow, the blacksmith by his anvil... All mistrust is misunderstanding! Therefore be united in the Soviet Republic of Bavaria! (Inventory #: 268397)
$1,500.00 add to cart or Buy Direct from Bolerium Books
Share this item