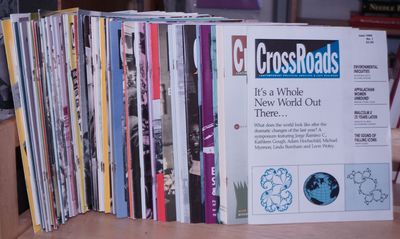 by Burnham, Linda et al editors
Oakland, CA: Institute for Social and Economic Studies, 1996. Magazine. Sixty-two issues of the journal, a complete run from its start in June 1990 to its last issue in August 1996. Issues present are Nos. 1-62. Various pagination, stapled wraps, 8.25x11 inches, some light wear, rolled spines, and rusted staples, about half with address labels on rear wraps, No. 23 with small stain on front wrap, No. 61 with ink stamp on front wrap else generally very good condition. CrossRoads began as an intellectual and activist regroupment effort during the early days of the destruction of the U.S.S.R and its American supporters in the Communist Party, USA. Various splits occurred and many regrouped around the Committees of Correspondence for Democratic Socialism and other organizations. CrossRoads tended to be the publishing outlets for these currents and tendencies. (Inventory #: 268153)
$175.00 add to cart or Buy Direct from Bolerium Books
Share this item