Story of the Unknown Church 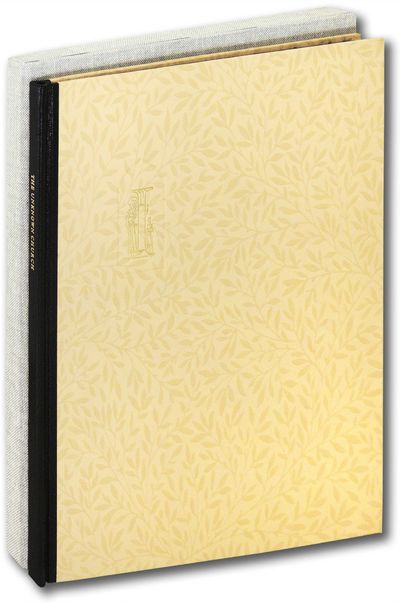 by Morris, William; Illustrated by Simon Brett; Theo Rehak, introduction
Baltimore: The Hill Press, 2001. Hardcover. Fine. Hardcover. One of 40 copies. Signed and dated by the printer, Stephen Heaver, owner of The Hill Press. This passionate and beautiful tale was written by William Morris at age twenty-one and published with many other of his writings in the short-lived Oxford and Cambridge Magazine. In his introduction, Morris scholar Theo Rehak quoted Joseph Dunlap as having observed that this particular story was the most perfect example of the works published, "a separate thing, better than the rest of the lot." Rehak also said that Morris did not allow these early pieces to be reprinted during his lifetime, and that he does not recall ever seeing an instance of their being done in a fine press book. The story tells of the journey of a Mediaeval stone cutter, his sister and her husband-warrior, all now departed. The prose is lyrical as it tells their story, and the land on which the church sat is described in all its beauty through the seasons. Morris writes of how beautiful the church is "in the solemn starry nights, so solemn that it almost reached agony - the awe and joy one had in their great beauty." This book was printed in Cloister Old Style type on paper made by Twinrocker for this book. Renowned engraver Simon Brett's engravings are printed from the blocks and include a full-page frontispiece of a cathedral interior, overlayed by by an image printed on transparent Japanese paper, and an historiated initial. The title page calligraphy by Sheila Waters was printed from an electro-plate. Bound in quarter black leather and tan decorated paper boards. Housed in grey cloth slipcase. In fine condition. Unpaginated [nine pages of text and three of introduction]. MOR/072921. (Inventory #: 35241)
$650.00 add to cart or Buy Direct from
Kelmscott Bookshop
Share this item