Iliad and Odyssey [In Greek] Four Volumes Bound as Two 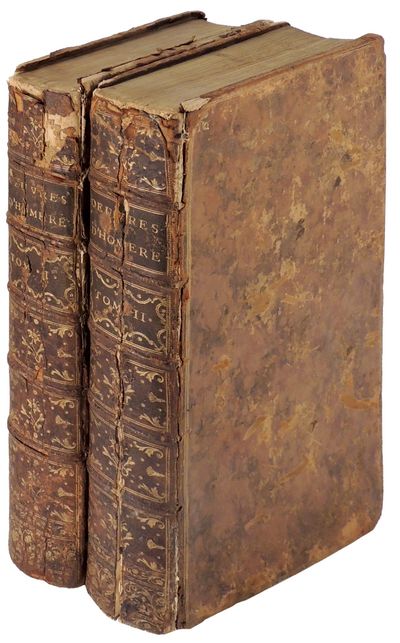 by Homer
Glasguae [Glasgow]: Robert and Andrew Foulis, 1758. Hardcover. Good. Hardcover. This edition of Homer's Iliad and Odyssey was published in Greek by the Foulis Press, founded by Robert and Andrew Foulis, and is widely considered to be its most famous production. Robert Foulis was born the son of a maltman. He was apprenticed to a barber, but was encouraged to become a publisher by Francis Hutcheson who was impressed by his ability. After spending 1738 and 1739 in England and France in company with his brother, Andrew, Robert set up a publishing business in 1741 in Glasgow, and in 1742 acquired his own press. He bought type from the renowned type-maker and punch-cutter Alexander Wilson. In 1743 he was appointed printer to the Glasgow University. As printers and publishers, the Foulis brothers were famous for their magnificent editions of the classics, such as their splendid folio editions of the Iliad and Odyssey (1756-58). Though relatively small, the Foulis Press turned out almost 600 editions in the years between 1742 and 1776. Using quality paper and fine typefaces made locally by Alexander Wilson, an expert in the field, Robert and his brother Andrew, who had joined the firm towards the end of 1746, quickly established a Europe-wide reputation as "the Elzevirs of Britain" for their well designed and immaculately executed editions of ancient classical texts. In one of the rare studies devoted to the brothers and their press, it is claimed that Winckelmann never travelled without Homer, "his companion at every instant of his life," according to the Life of Winckelmann, and that "the edition he had with him on his last journey (in the course of which he died) was that of Foulis, ‘very elegantly printed at Glasgow in 1756-58'" [Wikipedia and The Victorian Web]. The two folio volumes are bound in contemporary mottled brown leather. The bindings are quite scuffed, bumped, and rubbed. The spine of volume I has a large chip at the top and cracking to the joint. The spine of volume II has a crack from top to bottom and cracked joint. Both volumes have weak hinges. Interior pages have light browning and spotting throughout, particularly in volume I. Despite this, the beauty of the typography is still evident. Splitting to some gutters from books being opened flat. The Iliad: Volume I: 312 pages; Volume II: 336 pages. The Odyssey: Volume I: 297 pages; Volume II: 336 pages. CLASSICAL/072921. (Inventory #: 35239)
$1,200.00 add to cart or Buy Direct from
Kelmscott Bookshop
Share this item