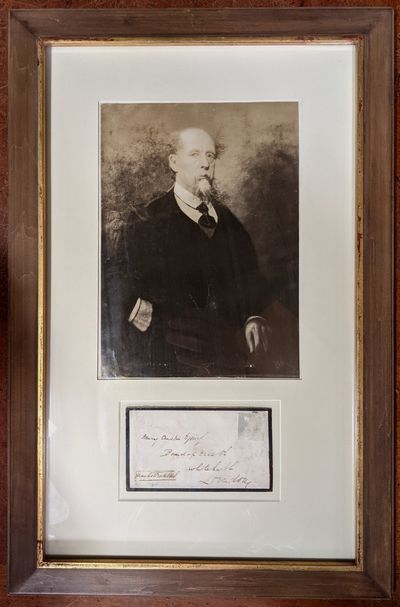 signed
by DICKENS, Charles
fine. Boldly signed and addressed postal cover "Charles Dickens", to his brother-in-law and best friend Henry Austin, who, at the time, was a Commissioner at the Board of Health at Whitehall, in London and a strong supporter of Edwin Chadwick's Public Health Act. 3" X 5", black-bordered mourning envelope, circa 1850's. Item is floated inside a white colored mat with two openings, with a sepia portrait-photograph of Dickens posed in formal attire, to 7" X 9 1/2", and set into a simple gold and brown wooden frame, to 13" X 20". Fine. DICKENS, Charles (1812 - 1870). English writer and social critic best remembered for creating some of the world's best-known fictional characters; regarded by many as being the greatest novelist of the Victorian era. When Dickens' brother-in-law died in 1862 it was Charles who secured a Government pension for his sister Letitia, based on his brother-in-laws service with the Department of Health! (Inventory #: 301552)
$1,200.00 add to cart or Buy Direct from
Argosy Book Store
Share this item