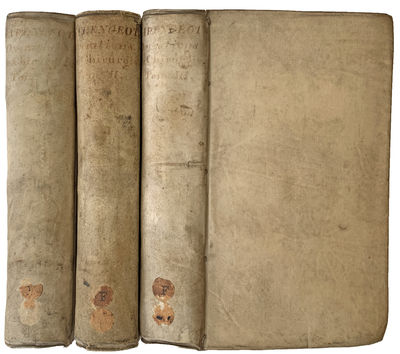 by CROISSANT DE GARENGEOT, Rene-Jacques (1688-1759).
Paris:: Chez Huart, 1731., 1731. 3 volumes. 12mo. xviii, [18], 476, [4]; [4], 468; [4], 472 pp. 24 engraved plates [I: 305, 306, 417, 418, 421; II: 71, 216, 229, 270, 356, 430, 449, 456; III: 16, 49, 87, 187, 188, 365, 369, 396, 399, 405, 407]. Original vellum. Ownership stamp on title of Bevord --- Genues[?], Heelk., Amsterdam. Nice copy. First published in 1720, this is the second edition. Croissant de Garengeot, like his father, was a surgeon. / Among the surgeries and procedures covered: hernia, hydrocele, dropsy, paracentesis, gastrorrhaphy, lower abdomen, sutures, treatment of wounds, scars, "regeneration of flesh", Stones in the buttock, lithotomy, stones in the urethra, operation of phimosis, prognosis of paraphimosis, castration, removing fistula from the anus, cysts, tumors, cancers, bronchotomy, amputation of arms, cleft lip, polyps, operating in the skull, , aneurysm, tendons, infection, gangrene, amputation of the leg, flaps, cruciate ligaments, amputation of the fingers, etc. / "Surgeons rarely commented on the pain of castration although some recommended particular techniques to minimize the pain they inflicted. Heister maintained that castration should be performed with ‘Circumspection and Tenderness', and that tying the spermatic vessels near the abdomen would cause less pain.109 Rene-Jacques Croissant de Garengeot advised that proper ligatures should be made in order to numb the area where the surgeon cut with surgical scissors (while separating the testicle from the scrotum). Garengeot stated that this would prevent both haemorrhage and pain. The surgical literature paid less attention to castration than to operations on breast cancers. There were striking similarities, however, in that for both sets of operations the surgeries occurred in the presence of significant pain, followed the failure of other methods, and threatened death." – Katherine A. Walker, "Pain and Surgery in England, circa 1620–circa 1740", Medical History, 2015 April; 59(2): 255–274. / The De Garengeot hernia is named for him: "A De Garengeot hernia is a rare form of femoral hernia, where the appendix is found in the herniated sac. This feature is important to report, as both the diagnosis and the treatment are quite challenging in this particular condition." – Amandine Klipfel, Aïna Venkatasamy, Caroline Nicolai, Marie-Noelle Roedlich, Francis Veillon, Cecile Brigand, Serge Rohr, Benoît Romain, "Surgical management of a De Garengeot's hernia using a biologic mesh: A case report and review of literature," International Journal of Surgery Case Reports, volume 39, 2017, Pages 273-275. / "Rene Jacques Croissant de Garengeot was a prominent French surgeon who provided a number of surgical innovations. Garengeot was among the group of French surgeons who were aware of the significance of the lucid interval seen in head trauma, although Garengeot himself was not as clear about the importance of delayed symptoms. The plates include a number of surgical procedures including amputation techniques, surgery of the eye, along with an important early craniotomy procedure." – Heirs of Hippocrates. / Born in Vitre, he arrived in Paris at the age of twenty-three, where he became a royal demonstrator then surgeon-major in the King's regiment and ordinary doctor of the King at Châtelet. He was master of the arts of Bourges, a famous physician of his time and participated in the work of the Academy of Surgery of Paris, of the Royal Society of London. / His name remains attached to the Garengeot key for the extraction of molars, of which he perfected the use. See: Heirs of Hippocrates No. 815.7 [1740 edition]; Waller 3419 (unrevised 2nd edition); Wellcome III p.89. (Inventory #: M14161)
$850.00 add to cart Available from
Jeff Weber Rare Books
Share this item