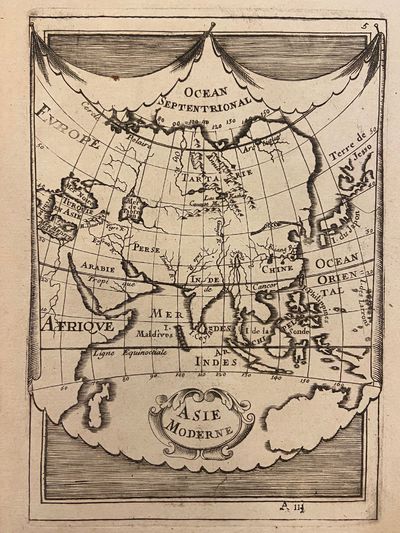 by MANESSON-MALLET, Allain
Paris: Denys Thierry, 1683. unbound. Miniature map. Copper plate engraving with hand coloring. Image measures 6" x 4 1/4". Sheet measures 8 1/4" x 5 3/8". This miniature map of modern Asia, rendered on a trompe-l'oeil banner, shows the continent between Turkey and Japan. The largely schematic borders of each area attest to the constant shifting of control over land between the various empires that occupied the continent. As the wavy colored outlines intersect with the lines of latitude and longitude of the map, the trompe-l'oeil banner appears almost to wave as to metaphorically embody the uncertainty of the ancient world. The map appeared in the French edition of Manesson-Mallet's "Description de L'Univers." It is in good condition with minor discoloration at the edges. Allain Manesson-Mallet (1630-1706) advanced from his position of musket bearer under Louis XIV to eventually occupy the position of "maitre de mathematiques" to the French King. He was the author and engraver of "Description de L'Univers," a five-volume survey of the world that included maps of the ancient and modern world, star maps, illustrations of flora and fauna, and information on the customs, religion and government of the many nations included in the text. At the time, the text was the largest and most comprehensive work of its kind ever published. Intended to entertain its readers, Mallet's "Description" was a time capsule of the 17th-century world that captured and displayed it in all its splendor. (Inventory #: 301604)
$200.00 add to cart or Buy Direct from
Argosy Book Store
Share this item

Sportsmen's Fishing Map of the United States and Neighboring Waters

Miami : National Trading, Inc , 1971
(click for more details about The West Indies)
View all from this seller>