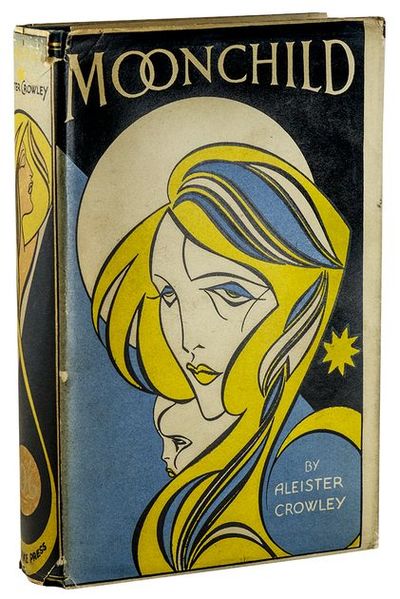 by CROWLEY, Aleister
London: Mandrake Press. 1929. A novel by the occultist, which is in part a roman a clef -- with various of Crowley's contemporaries and acquaintances appearing in thinly disguised characters: William Butler Yeats as "Gates," for example, and Arthur Edward Waite as "Edwin Arthwait." In addition, Crowley uses the novel form as a vehicle for the exposition of his esoteric philosophy -- he was the head of an occult society at the time, and the novel describes an ongoing magical war between a white lodge and a black lodge -- and as an account of a magical operation involving the creation of a Homunculus, or Magical Child, through the harnessing of spiritual powers derived from the Sun and Moon, incarnating a human being conceived without sex. One of Crowley's proteges later attempted to perform this magical ritual to create a homunculus, in an experiment done in 1947, the year Crowley died. Crowley reportedly feared that his protege might actually succeed in tapping into forces much larger and more powerful than he realized, and unleash great harm on the world. The protege, Jack Parsons -- a rocket scientist at the Jet Propulsion Laboratories during World War II -- worked on the experiment with L. Ron Hubbard, the founder of Scientology, and was later killed in a mysterious explosion in his laboratory, which speculation over the years has suggested was related to his continuing attempt to perform the homunculus operation and invoke the powers that Crowley describes in this volume. Offsetting to the front flyleaf, faint edge foxing; a very near fine copy in a very good, strikingly illustrated dust jacket with a couple of small edge chips and modest spine sunning. A scarce book in the first edition, in jacket. Unless otherwise noted, our first editions are first printings. First Edition. Hardcover. Near Fine. (Inventory #: 034869)
$2,500.00 add to cart Available from
Ken Lopez - Bookseller
Share this item

Intruder in the Dust

NY : Random House , (1948)
(click for more details about Intruder in the Dust)
View all from this seller>