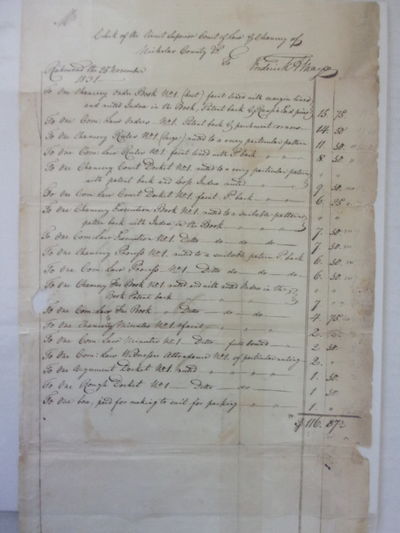 by MAYO, Frederick August
(EARLY VIRGINIA BOOKBINDER MANUSCRIPT) MAYO, Frederick August. Manuscript Invoice for Blank Books Bond for the Use of the Circuit Superior Court of the Law Chancery of Nicholas County, Virginia. (Virginia: November 25, 1831. Folio broadside (13 1/4 x 8 1/2 inches). Text ink. Rare early 19th century Virginia legal manuscript. Frederick Mayo (ca. 1785-1853) was a Richmond bookbinder and stationer who was Thomas Jefferson's binder from 1818 to just before his death in 1826. He was known for his full calf leather bindings, "in the style of the day, a combination of gold and bl tooling ...Restrained in taste and style, his bindings (would have) thoroughl satiated Mayo's most important patron...." When Jefferson first contacted Ma in 1818 he lamented the scarcity of good book binders in Virginia and local regions and sent Mayo a trunk of loose pamphlets and assorted other items to bound as a test for Jefferson of Mayo's talents, most of which show up in the Poor's auction catalogue for Jefferson's last library in 1829. Mayo was successful as a quality bookbinder and according to this document was commissioned to also bind county records and ledgers. Nicolas County was established by the General Assembly in Richmond in 1818 in the western fronti mountainous regions of the state and remained part of Virginia until the separation in 1863 of the western counties into their own state by the Union. The manuscript lists 18 items describing in detail Mayo's work, including rul and binding various kinds of blank books required for keeping court records. These include: "One chancery Order Book No. 1 (best) faint lined and margin lined and ruled Index in the book..."; "One Com. Law Orders No. 1 Patent back parchment corners....: "One Chancery Docket No. 1 ruled to a very particular pattern..." etc. All these ledgers are for Chancery Court activities which, apparently, was just established in the county that year by the General Assem in Richmond. The invoice lists Mayo's prices for the individual works, a total of $116.87 1/2, with a few faint pencil notations in right margins, each a somewhat high price than the one given in ink. With the address on the verso to "P. Burne, Esq, Merchant Lewisburg, Greenbrier County, Va.," with a circular date stamp "paid (Inventory #: 40728)
$2,500.00 add to cart Available from Bookpress
Share this item