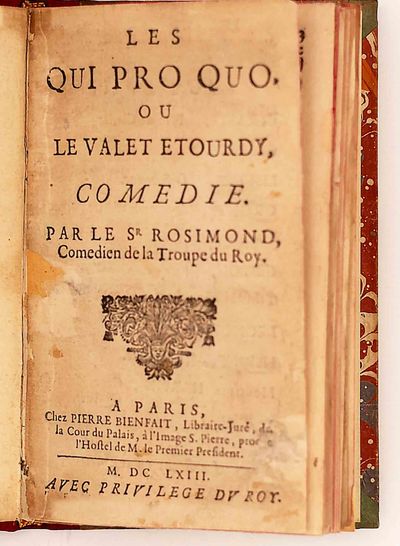 Fabrice is scatterbrained. He receives a love letter for Orontes from Léonor. He also is given a letter from Clarice for him. Unfortunately for Fabrice one was written by the wrong girl and the other reproaches Orontes for inconstancy. Fabrice confuses the letters and delivers each to the girl "for whom it is not meant" (Lancaster III, p787-79). Fabrice is summarily slapped and dismissed from service. The play is indebted slightly to Molière's L'Étourdi ou les contre-temps (1665) and also to Phillipe Quinault's Amanta indiscret ou le Maistre étourdi.(1656).

Claude Rose or Claude La Rose or de La Rose, (who came to be known as Rosimond or Rosimont) was an actor born in or around 1640 and died in Paris 31 October 1686. Little is known about his childhood except he was probably an actor in a provincial troupe based in Grenoble where he wrote and staged his first play in 1668. In 1673, he joined Molière's troupe and was the first actor, after the author's death, to play the lead in Le Malade imaginaire. Udoubtedly Rosimond was hired because of both his acting and writing skills in which the company had expectations of finding Molière's successor. Les qui pro quo, ou le valet etourdy was written while Rosimond was acting at the Marais. Rosimond stayed with the troupe when it moved to l'Hôtel Guénégaud. He became one of the first members of the Comédie-Française en 1680. According to the historian Maupoint (1733), Rosimond turned from drama in 1680 and wrote a Vie des Saints (Paris: G. Desprez, 1680) under the name of Jean-Baptiste Du Mesnil. He had a large library (now in Saint Petersburg), and he bought a grand house in Montmarte on 12 Rue Cortot that in later centuries became the home to many artists including Auguste Renoir, Suzanne Valadon and her son Maurice Utrillo. It now houses le Musée de Montmartre.

A great actor and a great drunkard Gaines (P413) writes that Rosimond was a prominent playwright and touring actor until he joined Molière's troupe as his replacement. He wrote Le Duel fantasque; L'Avocat suns éttude 1670; Le Nouveau Festin de Pierre 1670; Le Dupe amoureuse 1671; Les Trompeurs trompés 1671; Les qui pro quo, ou le valet etourdy. 1673. He continued on with this troupe as it moved to the Hôtel Guénégaud and then became the Comédie-Française. He was a full member when he died in October 1686 Mantzius (Pp 228-229) notes that he was the leading actor of the Marais theatre: "He was not only an excellent comic actor who undertook nearly all of Molière's parts, but a fertile and popular author as well. He quickly became a most important male actor and several of his plays had a great success....He was, moreover, an educated man, a scholar and a great collector with the largest collection of plays in Paris.....and a great drunkard." References: Catalogue Général des Livres Imprimés de la Bibliothéque Nationale, Paris, 1934,; t. 146, col. 56; Gaines, James (Ed). The Molière Encyclopedia (2002); Lancaster, H.C. A History of Dramatic Literature in the Seventeenth Century. Vol II. Baltimore: Johns Hopkins, 1936; Mantzius, Karl. A History of Theatrical Art. London:Duckworth, 1905; Maupoint. BibliotheÌque des theátres, contenant le catalogue alphabeìtique des pieÌces dramatiques, opera, parodies & opera comiques ; & le tems de leurs repreìsentations.; Paris, Chez L.F. Prault, 1733; Mellot, Queval, Répertoire d'imprimeurs/libraires XVIe-XVIIIe siècle, Paris, 1997 ; 416/ Rare edition. OCLC shows only a copy at Oxford, none in the U.S. (Inventory #: 130)
$1,750.00 add to cart Available from Golden Legend
Share this item
Golden Legend, Inc.
Offered by