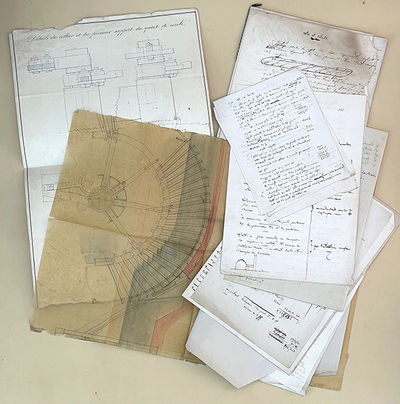 by LeBlanc, Charles
1847. Leblanc, Charles. Collection of manuscript documents and drawings on his design for a "belier d'épuisement" (exhaustion ram or pump) for use in canal locks, including: Letter dated 21 December 1847; hand-drawn plan titled "Détailes du collier et du premier support du quart de cercle"; portion of drawing on tissue; 8-page handwritten draft of an official document titled "Projet de Bélier d'épuisement"; 12-page document headed "Notes et calculs"; and a folder titled "Notes—documents" containing 20 sheets of notes, tables etc. Mayenne, 1846-47. Some rodent damage to a few documents affecting some lines of text, minor soiling. Very good. Leblanc's award-winning exhaustion ram, based on the same principle as Montgolfier's hydraulic ram, was designed to raise and lower water levels in canal locks. "In both, the living force of a mass of water moving in a pipe is used; but, as the exhaustion ram only lifts the water to low heights, it is not liable to be disturbed by the effect of the impact of the valves, and the one which has been employed in the work of navigation on the Mayenne [river] worked perfectly. As this method of exhaustion, ingenious and economical, can receive many applications, the jury awarded Mr. Le Blanc a silver medal" (Rapport du Jury Central sur les produits de l'agriculture et de l'industrie exposés en 1849 [1851], p. 104; translation ours). The hand-drawn plan, which illustrates some of the features of the machine, has been altered in pencil; the accompanying letter, dated 21 December 1849, notes that the pencil alterations are the ones to follow. . (Inventory #: 46219)
$750.00 add to cart or Buy Direct from
Jeremy Norman & Co.
Share this item
Jeremy Norman & Co., Inc.
Offered by

Minute of a conversation with Lord Bathurst . . . relative to Mr Park's Journal. Document in an unidentified hand

1812
(click for more details about Minute of a conversation with Lord Bathurst . . . relative to Mr Park's Journal. Document in an unidentified hand)
View all from this seller>