Business Archive of the Packet Ship "Splendid" while docked in New York City, 1834-1835 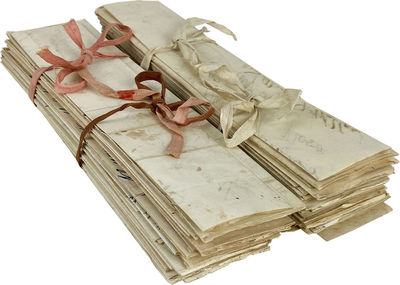 by [MARITIME - NEW YORK CITY]
New York, 1835. Sixty-nine manuscript receipts issued by local businesses to the owners of the coppered packet ship "Splendid" while docked in New York City from November, 1834, to June, 1835. Each leaf folded approximately 21x4cm. and bundled into two ribbon-tied packets marked in manuscript "6th vo[yag]e Splendid to Liverpool" and "Splendid 7." Occasional splitting at folds, though otherwise a remarkably fresh and Near Fine collection. The packet ship Splendid, captained by Augustus Proal, departed from Liverpool July 5, 1834, bound for New York. A contemporary advertisement promised potential travellers that "She is high and roomy between decks, and admirably adapted for Passengers." As well as ferrying passengers to the United States, the ship had also in past voyages transported to our shores one of the earliest steam engines, produced by Foster, Rastrick, & Co., in 1829. Nothing so substantial made the voyage this time around other than a king's ransom of fine, fresh teas, which were auctioned off in chests, half-chests, and boxes shortly after arriving in New York, on November 29, 1834.

The present collection comprises of the sixty-nine receipts accrued by the ship and its owners while docked in New York, including wages, victuals, and pilotage. Local strongman Robert B. Harris was first employed upon docking with the tasks of loading the sails to the loft and bringing in bread, flour, pork, beef, whiskey, and a medicine chest, for which he received £5 14s ($14.25). Four months later, in March, he was sought after again to bring in sawdust and more pork and beef, for which he received an additional £4 11s. Night watchman John Coger received a total of $39.50 for a series of stints in that capacity while at sea between August and November, 1834.

As well as manual labor and ship repair materials, of special interest to the gourmand are the lengthy receipts accrued with the local grocer Rogers & Schatzel, from whom the ship acquired, among many other items, sperm candles and oil, rum, buckwheat, vinegar, coffee and tea, bread, sweet potatoes, turnips, beans, salt and pepper, sugar, and, in a June, 1835, receipt, a smallish packet of peaches that set back the owners 50 cents. (Inventory #: 1544)
$950.00 add to cart Available from
L.N. Golay Books
Share this item
L.N. Golay Books
Offered by

Specializing in Books, Manuscripts, and Ephemera

Atlanta 1950
(click for more details about Collection of Three Watercolor Interior Design Maquettes for Mrs. Leon Jones of Atlanta, Georgia)
View all from this seller>