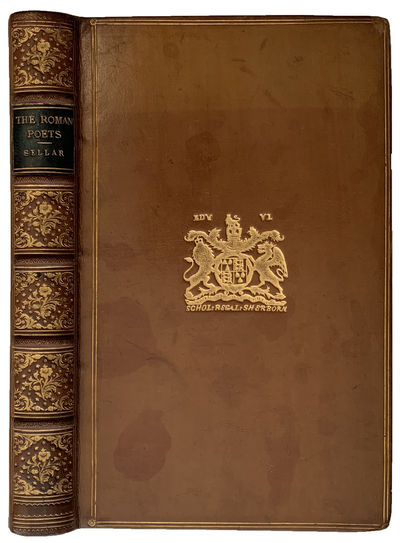 by SELLAR, William Young (1825-1890).
Edinburgh:: Edmonston and Douglas, 1863., 1863. 8vo. xiii, [3], 378 pp. Contemporary gilt-stamped calf, school prize binding, raised bands, black gilt-stamped compartments and spine label. Small early ownership signatures of W.P. Till, and Victor Watts, Merton College, 1957. Very good copy in a handsome binding. "William Young Sellar (1825–1890) was a scholar of Latin poetry. First published in 1880, this is a lively account of poetry in the Roman Republic, which was acclaimed as the purest art form of its time. Exploring the work of a range of poets, from Andronicus, Lucilius and others in the second century BCE, through to Lucretius and Catullus in the first century BCE, Sellar shows how poems were characterised by political, religious, and social factors, as well as by the personalities of the poets themselves. Looking at genres from tragedy to comedy to satire, he also considers the role of Greek literature in the shaping of Latin poetry, and how the poets influenced each other's work. The second edition of a volume originally published in 1863, this version features an updated account of the poems of Lucilius and Catullus, and two new chapters on Roman comedy." – Cambridge University Press. PROVENANCE: Victor Watts (1938-2002), British toponymist, medievalist, translator, and academic, specialising in English place names. Took his degree as Merton College, Oxford, and theUniversity of London. He served as Master of Grey College, Durham from 1989 until his sudden death in 2002. Watts had been elected a Fellow of the Royal Historical Society (FRHistS), and a Fellow of the Society of Antiquaries of London (FSA). (Inventory #: PW1663)
$100.00 add to cart Available from
Jeff Weber Rare Books
Share this item