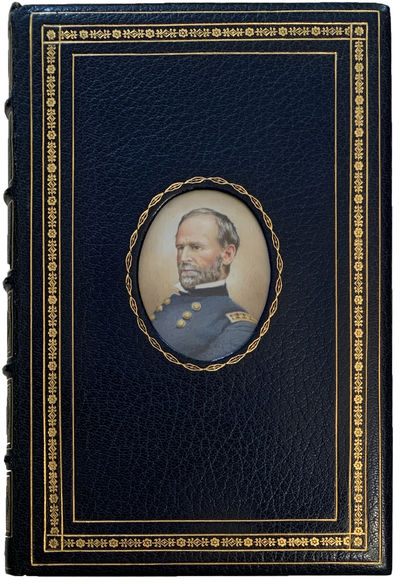 by [FORE-EDGE PAINTING; CIVIL WAR]. LEWIS, Lloyd.
New York:: Harcourt, Brace, 1932., 1932. 8vo. xii, 690 pp. Frontis. (portrait of Sherman), plates, index. Deluxe binding in contemporary navy blue crushed levant gilt, purple watered-silk moire endleaves, gilt dentelles, all edges gilt, upper cover with COSWAY-STYLE inset center medallion with glass plate protecting an original watercolor portrait of General Sherman. Protected in the original open-end box bound in half crushed morocco, raised bands, gilt stamps in each compartment, bale blue cloth sides, felt inner lining, cloth ribbon-pull. Beautifully preserved. Ownership inscription. Fine. First edition. Concealed under the gold edge a FORE-EDGE PAINTING of William Tecumseh Sherman (1820-1891), leading his troops to battle in the Civil War. In the scene, it appears that Atlanta (or Savanah?), all ablaze, is in the background (left) and a pasture of cows (right of center), a small rural bridge is in the path ahead leading to the next town. PROVENANCE: Inscribed (half-title) "For my friend Fred Herendeer, Lloyd Lewis, who wishes he could write humor into an inscription as Herendeer does into plays. May 26, 1939." Charles Frederick Herendeer was a Chicago playwright. / Another specimen by the same artist and binder: NORDHOFF, Charles (1878-1947). HALL, James Norman (1887-1951). Mutiny on the Bounty. Boston: Little, Brown, and Company, 1932 (but has no COSWAY MINIATURE). That piece does have a fore-edge Painting of the H.M.S. Bounty. Probably an American artist, either from New York or Chicago (the latter being more likely). I know of no other COSWAY-STYLE specimens recorded from this artist who painted fore-edge paintings. Noting that the publisher differs between these two books, yet the imprint dates are the same, the bindings are also from the same bindery (noting similarity of the cases too), and the fore-edges on both books are from the same artist. / "Sherman's life was a rich and varied tapestry, and Mr. Lewis has put the richness into his book. Not only does he make us understand Sherman, he makes us see again the tremendous, terrible pageant of the Civil War."—New York Times / "This is no ordinary military biography. . . . Lewis's excellent description of the relationship of Grant and Sherman and the meaning of the Union in Sherman's life are highlights which are not easily forgotten."—Civil War History. / "Lloyd Downs Lewis was a journalist, historian, and major figure in a remarkable world of arts and letters that flourished in Chicago following World War I. / After 12 years as publicist for Balaban and Katz, in 1930 he joined the Chicago Daily News as drama critic, becoming subsequently sports editor, managing editor, and a popular columnist. A gifted raconteur rich in friendships with the great literary, artistic, political, and sports figures of his time, Lewis was an ardent Chicagoan and Midwesterner with a voracious interest in the Civil War. His published work included Chicago: The History of Its Reputation (1929, with Henry Justin Smith); Jayhawkers, a three-act Broadway play coauthored with Sinclair Lewis (1935); and highly regarded biographies of Generals Sherman and Grant. His friends included Carl Sandburg, Sherwood Anderson, Frank Lloyd Wright, Sinclair Lewis, and Adlai Stevenson. Chicago's Newberry Library was his second home; drawing on his personal contacts, he established the library's superb collection of modern (chiefly Midwestern) manuscripts." – Richard H. Brown, Encyclopedia of Chicago. (Inventory #: FF2492)
$7,500.00 add to cart Available from
Jeff Weber Rare Books
Share this item