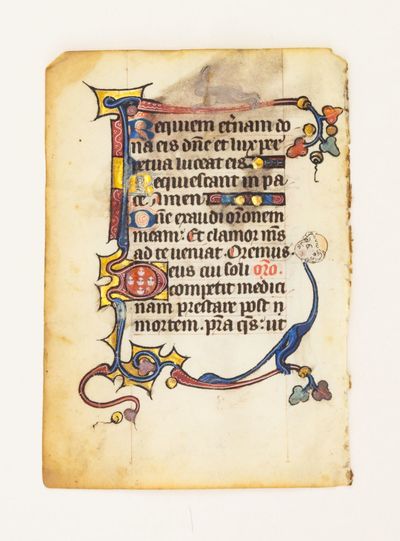 first half of 14th century · France

by VELLUM MANUSCRIPT LEAVES, OFFERED INDIVIDUALLY
France, first half of 14th century. 110 x 82 mm. (4 3/8 x 3 1/4"). Single column, 12 lines in a gothic book hand.
Rubrics in red, line enders in pink and blue with gold accents, each leaf with one or more one-line initials in blue with red penwork or gold with blue penwork, each leaf with a two-line initial painted blue or pink and filled with fish, armorial patterns, or other motif, ONE OF THESE INHABITED BY A HUMAN HEAD, most on a gold ground, one side of each leaf with A FULL BORDER composed of pink and blue tendrils accompanied by spikey gold decoration and gold accents, often terminating in ivy leaves, and incorporating EXTRAORDINARILY CHARMING EXAMPLES OF MARGINALIA, INCLUDING ANIMALS, HUMANS, AND HYBRIDS. Vellum a little soiled, some with noticeable staining or smudging affecting parts of the text and decoration (including a few instances of marginalia) as well as more minor instances of rubbing or smudging, but each leaf with at least one excellent example of the marginalia intact and still very well preserved.

Though diminutive in size, these leaves contain enormously appealing marginal decoration in the form of humans, animals, and hybrid creatures inventively incorporated into the lively borders in manners that range from adorable to bizarre. Especially popular in Flanders, Northern France, and England during the 13th and 14th centuries, marginalia such as these comprise some of the most memorable and entertaining images to be found in any Medieval manuscripts. Despite being found largely in religious books such as Psalters and Books of Hours, the images are often strange, humorous, or even outrageous, and they provide us with consistent delight. Being by definition outside of the central text or miniature, the margins seem to have been a place where illuminators felt more at ease to experiment, resulting in highly imaginative and unique artistic expressions. The present specimens come from a fragmentary manuscript, with many leaves either missing or rendered defective where portions of the vellum were cut away. Fortunately, this group of leaves is intact and retains much marvelous imagery, including a hare, two fish, two bird heads with long beaks locked in battle, several hybrids (including one with the head of a human and the body of a bird, and others with human heads on the bodies of imaginary beasts with long necks and tails), and the heads of beasts with impressive horns incorporated into the ends of border tendrils. For additional leaves from this same manuscript at different price points, please check our website.. (Inventory #: ST16985J)
$1,560.00 add to cart or Buy Direct from
Phillip J. Pirages Fine Books
Share this item

THE JEW; BEING A DEFENCE OF JUDAISM AGAINST ALL ADVERSARIES, AND PARTICULARLY AGAINST THE INSIDIOUS ATTACKS OF "ISRAEL'S ADVOCATE." Vol. 1, No. 1

[New York : Johnstone & Van Norden] , March 5583 [1823]
(click for more details about THE JEW; BEING A DEFENCE OF JUDAISM AGAINST ALL ADVERSARIES, AND PARTICULARLY AGAINST THE INSIDIOUS ATTACKS OF "ISRAEL'S ADVOCATE." Vol. 1, No. 1)
View all from this seller>