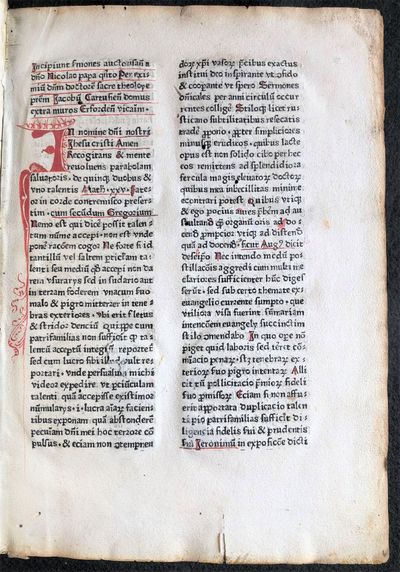 The author is known by several different names, based in part on his successive monastic affiliations: de Paradiso, after the Cistercian monastery of Paradies near Meseritz in present-day Poland, which he entered in 1400; de Claratumba after the Latin name for the abbey of Mogila, near Krakow, which he entered in 1420 after matriculating at the University of Cracow; de Jüterbog, the name used by Trithemius (and still by the Gesamtkatalog), and hence propagated widely, although based on a conflation with another Jacobus, and others. The "de Clusa" of the incunable literature was apparently first used by Hain, on uncertain grounds. In spite of the confusion generated by his many appellations, which included the generic "Jacob the Carthusian," based on his final, 23-year residency as Vicar of the Charterhouse of Erfurt, Jacobus can usually be identified in early sources by the title of doctor, for he was one of the first Cistercians of Germany or Poland to earn the degree of Doctor of Theology.

A conciliarist and unwavering proponent of church Reform, after the schism of the Basel council in 1439 Jacobus left Poland, the Cistercians, and the University, to take refuge with the Carthusians in Erfurt. There he produced a wide-ranging and influential body of writing whose central themes were the urgent necessity of reform in the Church, bitter criticism of clerical authorities, and skepticism toward the mendicant orders' conviction that they could heal souls through pastoral care.

Very little is known of this anonymous press, active in the early 1470s and named after its ca. 1472 edition of pseudo-Hus, Gesta Christi. Nominally the second press of Speyer, it was probably a continuation of (or identical with) the press identified as "Printer of the Postilla Scolastica super Apocalypsim," based on that edition, dated 1471. Typographic similarities and the fact that one "press" followed so neatly upon the other support this likelihood; in his marginal notes reproduced in the British Museum catalogue, Victor Scholderer wrote "There was probably only one printer, who had previously worked at Rome" (II, p. xi). The press was also no doubt linked with the next Speyer press, that of Peter Drach: Thomas Dorniberg, Speyer Ratsadvocat, appears in connection with several editions assigned to all three of these presses, and it is possible that Dorniberg and Drach were both involved in the earliest printing activities in Speyer.

This copy, with its deep three-dimensional type impressions, and the edition itself, bear several features that throw light on the fluid state of 15th-century printing practices, and on the challenges facing small and possibly somewhat inexperienced printers. Besides the usual occasional traces of inked formes, the lines of type are rather endearingly wobbly throughout, and in the first part of the Sermones de Sanctis they appear almost leaded; Pollard in BMC commented that "the type in the earlier part of the book appears to have been very loosely locked in the forme." The quire signing in the Sermones de sanctis also bears some irregularities (which is not surprising, printed quire signatures having been a recent development): the first 16 quires are signed a-q, but the next 8 quires have no letters or other symbols to differentiate the quires, although the first four leaves of each quire are signed i-iiii. Thenceforth manuscript quiring is occasionally partly visible in the center of the bottom margin on first recto of each quire (even where the printed quire signatures have recommenced).

For this copy, problems did not end after printing: the outer sheet of quire l in the Sermones de sanctis was evidently damaged, possibly in transit to the bindery, and the binder or presumably monastic owner who commissioned the binding decided to replace the text with a manuscript bifolium. Written in a cursive hand in brown ink with red capital strokes and underlining, the manuscript copies the two-column format of the printed text, but the scribe misjudged the space required for his text, and the second columns on the versos of both leaves end in the upper quarter or middle of the page, leaving a blank space. This prompted the scribe to add a note on both pages, explaining that nothing was missing (hic non est defectus).

A painting of the Shroud of Turin on silk

by SHROUD OF TURIN

[Piedmont : 17th or early 18th century]
(click for more details about A painting of the Shroud of Turin on silk)