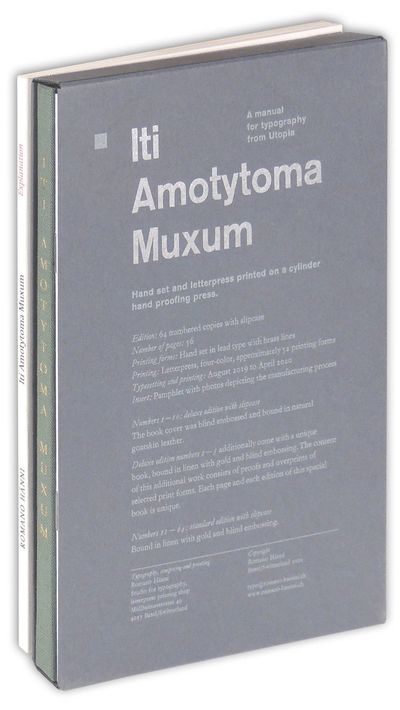 by Hänni, Romano
Basel: Romano Hänni, 2021. Hardcover. Fine. Hardcover. Number 24 of the 54 copies of the standard edition. There are 10 additional copies of the deluxe edition. Each copy of the book comes with a pamphlet with photos of the manufacturing process and a soft cover book with Romano's explanation of this new work. Swiss book artist and typographer Romano Hänni (1956 - ) has been experimenting with unusual compositions of letter forms and symbols since the early 1980s. His designs can seem somewhat whimsical but often are reactions to society, politics, and traumatic events. Creating things manually with the participation of all of the senses is very important to him. A master of visual poetry, he enjoys teaching to pass on his knowledge and skill. In this book, Romano states that he is reprinting the original text of the Iti Amotytoma Muxum that arrived in England from Utopia in 1535. The book was purportedly soon "lost in the darkness of history" until 2019, when it was revealed to be in the Vatican Secret Archives. The book artist says that he was able to get possession of the book for a few weeks. Although not able to translate the mysterious lost language of Utopia, he was able to recreate the harmonious overall impression of the book with its deliberately used proportions and its classical and elementary typography. According to his book of explanation, Romano created this work in response to his own ethical, moral, and political beliefs about our modern world. The book is an intriguing production that beautifully displays his mastery of symbols and letter forms. It was hand set in lead type with brass lines and letterpress printed in black and four-colors. There were approximately 52 printing forms. The book is bound in green linen with gilt titling to front cover. It is housed in a grey paper covered slipcase along with the pamphlet of photos. In fine condition. Measures 5 x 7.5 inches. Book: 56 pages; Explanation volume: 23 pages. ARTB/090321. (Inventory #: 35292)
$700.00 add to cart or Buy Direct from
Kelmscott Bookshop
Share this item

A View of Society and Manners in Italy: With Anecdotes Relating to Some Eminent Characters Two Volumes

London : W. Strahan and T. Cadell , 1781
(click for more details about A View of Society and Manners in Italy: With Anecdotes Relating to Some Eminent Characters Two Volumes)
View all from this seller>