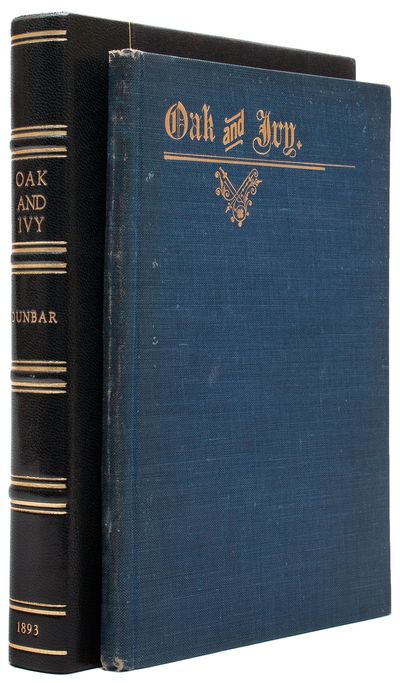 by Dunbar, Paul Laurence
Dayton, Ohio: Press of United Brethren Publishing House, 1893. First and only edition of the very scarce first book by African-American poet Paul Laurence Dunbar, presented by his mother to the principal of The Preparatory High School for Colored Youth in Washington, D.C., upon its re-dedication as Dunbar High School in 1917. The ambitious son of former slaves, Dunbar published Oak and Ivy at his own expense at the age of 21, selling copies of the volume to passengers in the elevator he operated in downtown Dayton, Ohio. His efforts eventually attracted the attention of Frederick Douglass, who hired him to work the Haitian Pavilion at the Chicago World's Fair, and William Dean Howells, who reviewed Dunbar's second collection in Harper's Weekly, gaining him a national readership. Dunbar became the first African-American poet to make a living as a writer, notable for working in two different registers. The poems he called his "majors" employ conventional English diction and meter, as in "Ode to Ethiopia:" "Be proud, my Race, in mind and soul; / Thy name is writ on Glory's scroll / In characters of fire." Those poems he termed "minors" are written in a lyrical African-American dialect: "It's hot today. The bees is buzzin' / Kinder don't-keer-like aroun.'" Although Dunbar died young of tuberculosis in 1906, his work paved the way for the Harlem Renaissance of the 1920s, inspiring Langston Hughes, among others. The 1917 renaming of Washington, D.C.'s Preparatory High School for Colored Youth in Dunbar's honor testifies to his lasting influence. The dedication ceremonies took place over the course of a week, and Matilda Jane Dunbar, his mother, was honored by the students and faculty on the first day. Born into slavery in Kentucky, she moved to Dayton after the Civil War and worked as a laundress while raising her children. Although she was not formally educated, Matilda taught her son to read when he very young, shared the memories of plantation life that inspired many of the poems, and supported him emotionally and financially throughout his life. He dedicated Oak and Ivy to "My Mother, who has ever been my guide, teacher, and inspiration." This copy of Oak and Ivy was presented by Matilda Dunbar to the principal of Dunbar High School on the occasion of the school's re-naming. BAL 4916; Blockson 6021. A moving association copy of Dunbar's scarce and fragile first book. Single volume, measuring 7.25 x 5 inches: 62. Original dark blue cloth decorated and lettered in gilt. Ink presentation note on front pastedown: "Presented to Mr. & Mrs. Garnet C. Wilkinson on the occasion of the dedication of the Dunbar High School, January 15-19, 1917 by Mrs. Matilda J. Dunbar," and signed beneath, in her own hand: "Mrs. M. J. Dunbar." Binding shaken, text block loose. Housed in a custom chemise and slipcase. (Inventory #: 1003018)
$9,500.00 add to cart or Buy Direct from Honey & Wax
Share this item
Honey & Wax Booksellers
Offered by

by Students of Shishmaref Day School