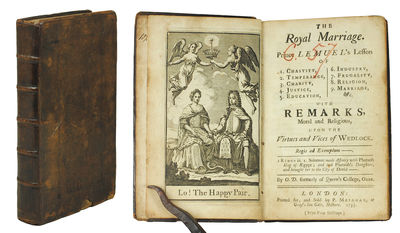 by Dykes, Oswald.
8vo. London: P. Meighan, 1733. 8vo, xxiii, [1], 368 pp. Engraved frontispiece. Contemporary blind paneled calf, front hinge strengthened, front endpaper removed, unlabeled backstrip with raised bands, extremities rubbed with some loss of calf. A sound copy with old manuscript shelf mark in red on front pastedown and title page. § Apparently an unrecorded reprint of the 1722 first edition of this lively treatise on domestic virtues. The title page has been newly set ("King Lemuel" of the first edition has been demoted to a prince) but the pagination is the same. Three previous books of moral instruction are credited to Oswald Dykes (1670?-1728), who is described on the title page of the first edition as "formerly of Queen's College, Oxon and amanuensis to Sir Roger L’Estrange." His advice is no mere rehash of dry, scholastic dictums but is rather an entertaining mix of pious exhortations, social commentary, and practical advice, largely aimed at the modern housewife. Women are encouraged to educate their children ("Women should not be denied any learning") and to keep a firm hand on the family finances, ideally investing wisely in London real estate (go for ground-rents over structures, avoid mortgages), and avoiding financial speculation in "money-bubbles," with specific mention of the South Sea Company. Husbands should avoid harlots, gluttony, and hell-fire clubs. The edition of 1722 seems reasonably common in institutions (see ESTC T124597) but we can find no record of this edition on OCLC or in auction records. (Inventory #: 124136)
$975.00 add to cart or Buy Direct from
John Windle, Bookseller
Share this item

London : Faber and Faber , 1945
(click for more details about All Hallows' Eve.)
View all from this seller>