Narrative of Sojourner Truth; a Bondswoman of Olden Time, Emancipated by the New York Legislature in the Early Part of the Present Century; WITH A History of her Labors and Correspondence, Drawn from her "Book OF Life. 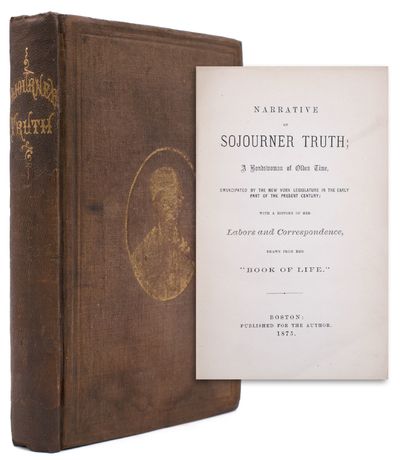 "A legend in her own time, Sojourner Truth's indomitable will has won her a permanent place in American History" - Blockson.  "In modern times she has come to stand for the conjunction of race, class, and gender in American liberal reform and symbolizes the unintimidated, articulate black woman.  Acutely intelligent although totally unschooled, Truth represents a type of inspired, naive witness that has long appealed to Americans suspicious of over-education" - ANB

This revised 1875 edition of the Narrative retains the Preface by abolitionist William Lloyd Garrison. This new edition contains significant changes: "[f]or example in 1875, in addition to edits to the text itself, Truth decided to expand her biography and had Frances W. Titus edit a selection from her scrapbook, titling it, 'Book of Life,' replacing the original appendix by Theodore D. Weld, 'Slavery A System of Inherent Cruelty.'"

Testifying at the 1851 Woman's Rights Convention in Akron, Ohio as a self-freed black woman who sought to empower women with basic rights and dignity may be considered the high spot in her remarkable life. There, Truth electrified audiences in a speech with the now-legendary refrain "Ar'n't I a Woman?," a speech printed here in this edition of her Narrative for the first time in full, as reported by Frances Dana Gage (pages 133-135). In part: "Dat man ober dar say dat women needs to be helped into carriages, and lifted over ditches, and to have the de place every whar. Nobody eber help me into carriages, or ober mud puddles, or gives me any best place (and raising herself to her full height and her voice to a pitch like rolling thunder, she asked), and ar'n't I a woman? Look at me! Look at my arm! (And she bared her right arm to the shoulder, showing her tremendous muscular power.) ... I have borne thirteen chilern and seen 'em mos' all sold off to slavery, and when I cried out with a mother's grief, none but Jesus heard-and ar'n't I a woman?". Blockson, 101 Influential Books, 29; Work, p.476; Howes G163; Women's Writing in the United States, pp.888-889; ANB 21, pp.880-882 (Inventory #: 321421)
$6,500.00 add to cart or Buy Direct from
James Cummins Bookseller
Share this item
James Cummins Bookseller Inc.
Offered by

London : Published For The Julian Editions by Ernest Benn Ltd , 1927
(click for more details about [Works] The Complete Works of Percy Bysshe Shelley Newly Edited by Roger Ingpen and Walter E. Peck)
View all from this seller>