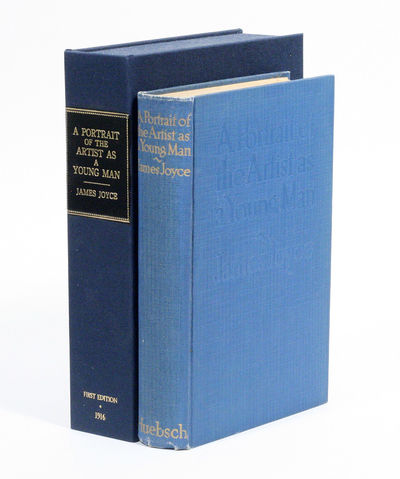 by JOYCE, JAMES
New York: B.W. Huebsch, 1916. First edition. Original cloth. Very Good. FIRST EDITION OF JOYCE'S CLASSIC FIRST NOVEL. "No one could overestimate the effects of [the book] on later Irish writers ... Or on the national psyche: many young Irishmen came to painful consciousness reading those corrosive pages. The Dublin of my student days was strewn with versions of Stephen Dedalus, including myself... Little failed saints. We knew eternity too early" (John Montague).

"Joyce's novel remains vital, in contrast to almost all other novels published in 1916, because he forcefully strived toward an idiosyncratic form of expression, a language intrinsic to the story he wanted to tell, about the young protagonist, Stephen Dedalus, and his formative years in Dublin, in which uniqueness was the very point and the question of what constitutes the individual was the issue posed" (New York Times).

Note: This New York first edition by Huebsch is the true first edition, appearing a month before the English issue (from the New York sheets).

Photograph of Virginia Woolf with Her Father

London : George Charles Beresford , 1902
(click for more details about Photograph of Virginia Woolf with Her Father)
View all from this seller>