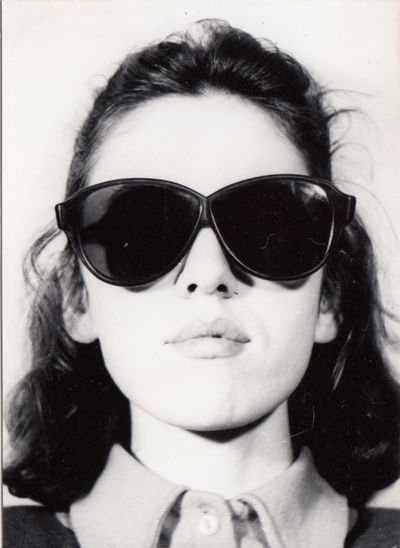 by Marcolla, Jolanta and Zdzisław Sosnowski
Two leaves of photocopied photographs and typescript, measuring 28.5 × 19 cm, both dated November 1971 and intended as a kind of promotional leaflet. Marcolla's sheet is titled "Oferta" and reproduces eight photographs by the artist. Sosnowski's sheet shows twelve photographs mostly showing the artist shaving and is captioned (in Polish) with a statement about his use of film and photography: "I use film and photography. However, not for aesthetic aims or to achieve formal effects. Mostly I capture my life on photos and film. Very often I do not even watch this material."

These materials were sent by Marcolla and Sosnowski to Fluxus member Ken Friedman in San Diego (Fluxus West), and passed from him to Dutch collector Tjeerd Deelstra. The original hand-lettered envelope is also included. Rare group of photographic works by the long overlooked Polish artist Jolanta Marcolla (born 1950), who was the first Polish female artist to draw on film and also widely used photography for her conceptual projects. In 1970, she co-founded the Gallery of Current Art (Galeria Sztuki Aktualnej).

"At the beginning of the 1970s Jolanta Marcolla was one of the founding members of a group of artists known as "The Actual Art's Agency". The members were students and graduates of the Academy of Fine Arts in Wrocław (painting and sculpture departments) with a particular interest in film and photography. In her films, Marcolla focuses on the analysis of media properties of film and video (concentrating mainly on the analysis of the relation between the film and the reality depicted within). She presents her movies as very long film loops. It has to be emphasised that Marcolla was the first Polish female artist to select video. Her first piece - closed-circuit installations - was completed in 1975. These projects were performed in Łódź with the help of the members of Warsztat Formy Filmowej (Workshop of the Film Form)." (https://artmuseum.pl/en/filmoteka/praca/marcolla-jolanta-kiss)

Marcolla was the first wive of Sosnowski, with whom she compiled the present mailing, and whose work in conceptual photography and film made him a leading representative of the Polish neo-avantgarde in the 1970s. He is best known for his series "Goalkeeper" (1974) and was closely allied with the Permafo Gallery group. In the 1980s, Marcolla withdrew from the art world and became an illustrator of children's books. Very little appears to have been written about her work in English. (Inventory #: 51506)
$3,500.00 add to cart or Buy Direct from
Bernett Penka Rare Books
Share this item

Catalogue of a Selected Portion of the Famous Library formed by the Late Mortimer L. Schiff, Esq. and Now Sold by Order of John Mortimer Schiff, Esq. of New York City. Three volumes bound together (complete)

by Sotheby and Co


(click for more details about Catalogue of a Selected Portion of the Famous Library formed by the Late Mortimer L. Schiff, Esq. and Now Sold by Order of John Mortimer Schiff, Esq. of New York City. Three volumes bound together (complete))


(click for more details about Hayartun, no. 1 (all published))
View all from this seller>