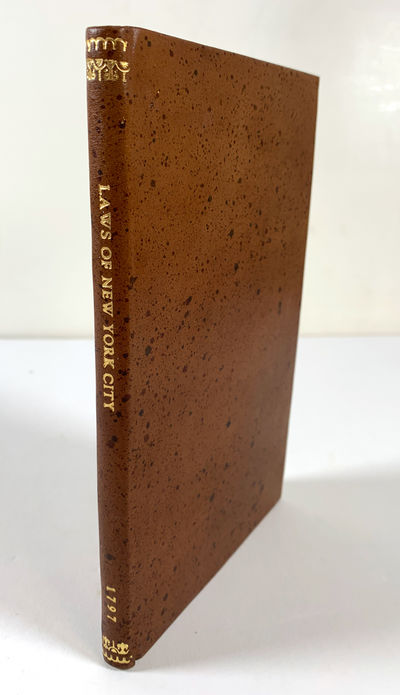 by James Kent
JAMES KENT.
Signed Copy of Laws and Ordinances, Ordained and Established by the Mayor, Aldermen and Commonalty of the City of New-York...Passed and Published the first day of May, 1797, in the eighth year of the Mayoralty of Richard Varick, Esquire. New York: George Forman, 1797. First edition, James Kent's signed copy with autograph notations to front endpapers. Modern calf. 67 pp., 8⅛ x 4¾ in.


Each year, the City of New York published all laws and ordinances passed by the mayor, aldermen, and commonalty of New York City. Richard Varick served as mayor from 1789 to 1801, and the city population doubled during his administration. His support for the unpopular Jay Treaty in 1794 nearly caused him to be driven out of City Hall by a riot. James Kent was the city's Recorder.

This volume concerns 1797, the eighth year of Varick's administration, which was focused on basic necessities like paving roads, limiting nuisances, preventing and extinguishing fires, and disease control. The city created a commissioner of health, who focused on draining stagnant water from swamps and meadows. Laws published here also regulate fences, the keeping of gun powder, ringing bells for funerals, and the sale of hay, firewood, lime, charcoal, manure, sand, and horses, et al. To prevent nuisances and obstructions in the streets, regulations were promulgated on surveyors, cartmen, public markets, vessels at the public wharfs, and the prevention of horses and goats going at large, etc. The first law calls for "The due observance of the Lord's Day, called Sunday," and prohibits servile labour excepting "works of piety, charity or necessity." The third regulates and taxes the admission of "Freemen" to New York. (The word "Freemen," though not defined in this statute, refers to persons with full political and civil rights. This law does not mention slaves or women.

Kent's manuscript notes include a list of magistrates and aldermen and assistants from May 1, 1797, including Gabriel Furman, Robert Lenox, Theophilus Beekman, Cornelius J. Roosevelt, Anthony Post, Jacob Delamontayne, Anthony Brown, Nicholas Bayard and others. On the opposite page, Kent added a note recording the results of the election of September 29, 1797, with an additional note added recording the death of Alderman Bayard in March 1798.

Provenance: Given by Kent to the Howland Circulating Library, acquired by the library of the New York Bar Association in 1918, deaccessioned 2014.

1808, 1809
(click for more details about An Incredible Thomas Jefferson Relic from One of the Most Contentious Legal Cases)