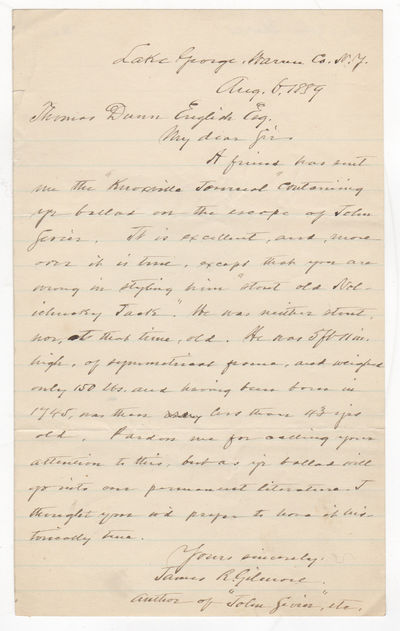 by Gilmore, James Roberts
Lake George [New York], 1889. Very good.. [1] pp. 5 x 8 inches. Letter to Thomas Dunn English correcting English's recently published ballad on the escape of John Sevier, a famous Virginia pioneer and Indian fighter, about whom Gilmore had written a biography published less than two years earlier. English (1819-1902), a poet and politician, had had a violent feud with Edgar Allen Poe, who later claimed to have given him a "flogging which he [English] will remember to the day of his death."

Gilmore writes:
"A friend has sent me the "Knoxville Journal" containing your ballad on the escape of John Sevier. It is excellent, and more over, it is time, except that you are wrong in styling him "stout old, Nolichucky Jack". He was neither stout, nor, at that time, old. He was 5 ft 11 in. high, of symmetrical frame, and weighed only 150 lbs, and having been born in 1745, was then less than 43 yrs old. Pardon me for calling your attention to this, but as your ballad will go into our permanent literature, I thought you prefer to have it
historically true." Signed and dated Lake George, August 6th, 1889, James R. Gilmore author of "John Sevier" etc.

James Roberts Gilmore (1822- 1903) was an author who sometimes used the pseudonym Edmund Kirke. Prior to the Civil War he ran a successful cotton and shipping business. As an abolitionist, after start of the war he wrote novels, war songs and ballads based on realistic portrayals of southern life, pressing for emancipation. To support this position he founded the Continental Monthly which was discontinued after the President issued his Emancipation Proclamation. In 1863 Gilmore convinced Lincoln to send a Methodist parson turned soldier, Colonel James Jaquess, as a minister of peace to persuade Confederate president Jefferson Davis to end the war. Jaquess's trip was a failure. But Gilmore knew, as did Lincoln, "that Davis would refuse even the most generous terms if they excluded the Union's recognition of the South's sovereignty and independence. Hence they plotted to use [a new] meeting (Jaquess's honorable intentions notwithstanding) to extract some such absolute, unequivocal statement from Davis, which Gilmore succeeded in doing. As a result of the trip, Gilmore quickly published Davis's implacable response first as a "card" in the Boston Evening Transcript on 22 July and then later in a much more extensive version as "Our Visit to Richmond..." [The all but destroyed the] "universal impression existing at the North that some honorable peace could be made with the South." (Vernon G. Miles: Gilmore, James Roberts: ANB article.1600626)

Perhaps Gilmore's correction took. In the later version of "The Rescue of Sevier" (published in the "New York Ledger" and later in "The Select Poems of Dr. Thomas Dunn English" (1894), Sevier is not referred to as "stout" nor "old." (Inventory #: 44139)
$275.00 add to cart or Buy Direct from
Kaaterskill Books
Share this item

1. All orders are subject to prior sale. To order call, fax, email, or use online order screen. 2. Books are in very good condition unless otherwise noted. 3. Books may be returned in original condition for any reason within 30 days. It is helpful if you notify us first so your refund can be processed promptly. 4. Payment can be by check, money order, bank transfer, or American Express, Mastercard, and Visa charge cards, or Paypal. Foreign orders should be in U.S. funds drawn on a U.S. bank. 5. New York residents will be billed appropriate sales tax (unless a tax id number is provided); if paying by check please add the proper amount. 6. Libraries and Institutions can be billed according to their needs. 7. All items are shipped boxed. For domestic orders books are normally shipped USPS media unless another method is specified; shipping and handling is $5.00 for the first book and $1.50 for each additional volume, media rate. For Priority Mail, add $4.50 for the first volume. For Express Mail or other needs, please contact us. 8. FOR INTERNATIONAL ORDERS, shipping and handling is calculated individually in order to insure the most economical rate. Posted rates on this site are based on the average book. Some books can be shipped for less. 9. Large or extra heavy books and sets may incur an additional fee. 10. All items are shipped insured by us at no additional charge.
More from this seller

[Printed Customs Receipt] Noah Gets his Spoils. Port of New York Receipt for Hyson Tea, Imported from China on the Ship Isabella

New York 1830
(click for more details about [Printed Customs Receipt] Noah Gets his Spoils. Port of New York Receipt for Hyson Tea, Imported from China on the Ship Isabella)