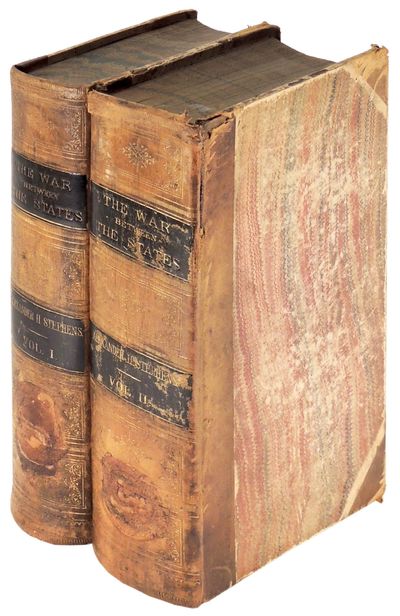 by Stephens, Alexander H.
Philadelphia and Chicago: National Publishing Company and Ziegler, McCurdy & Co, 1870. Hardcover. Very Good -. Hardcover. First editions. Alexander Hamilton Stephens[a] (1812 - 1883) was an American politician who served as the vice president of the Confederate States from 1861 to 1865, and later as the 50th governor of Georgia from 1882 until his death in 1883. A member of the Democratic Party, he represented the state of Georgia in the United States House of Representatives before the Civil War and before becoming governor. The Howes bibliography describes this book as the "most elaborate - and best - argument for the constitutional validity of the doctrine of state sovereignty and the right of succession." Stephens was a supporter of the institution of slavery but initially opposed breaking up the union. Bound in three quarter brown leather with marbled paper boards. Black title and author labels to spines. Leather is scraped, rubbed, and worn as are the paper boards. Evidence of round spine labels and signout forms on rear pastedowns having been removed. Scattered foxing throughout Volume I; Volume II is cleaner and brighter. Offsetting from the engravings in both volumes. A few margin notes in Volume II. Engravings include Liberty Hall, Jefferson, Washington, Andrew Jackson, Stephens, Stephen Douglas, Lincoln, Jefferson Davis, Lee, and Grant. A few ink notations on endpapers, bookplate and ownership signature of Dr. W.J. Murrell. Very good minus. Octavos. Volume I: 827 pages plus 4 pages of publisher ads; Volume II: 654 pages plus 3 pages with solicitations for hiring publisher agents. CIVILW/091021. (Inventory #: 35299)
$200.00 add to cart or Buy Direct from
Kelmscott Bookshop
Share this item

The Popular Cyclopaedia of Modern Domestic Medicine, Suited for the Heads of Families, and Comprising Every Recent Improvement in Medical Knowledge One Volume Bound as Two

London : E.T. Brain & Co , 1852
(click for more details about The Popular Cyclopaedia of Modern Domestic Medicine, Suited for the Heads of Families, and Comprising Every Recent Improvement in Medical Knowledge One Volume Bound as Two)

The Adventures of Thomas Jefferson Snodgrass

Chicago : Pascal Covici , 1928
(click for more details about The Adventures of Thomas Jefferson Snodgrass)
View all from this seller>