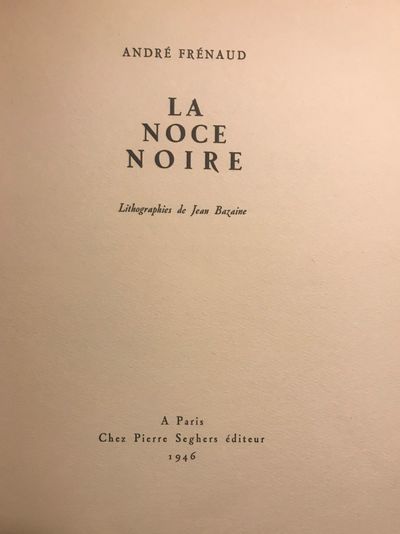 by FRENAUD, Andre
Paris: Chez Pierre Seghers Editeur, 1946. Limited Edition of 150 numbered copies, of which this is #52. Signed presentation from Frenaud on the half-title page: "Pour Paulette et Hector Descomps cette tentative d'une figure mythique de l'homme dans la modernite. leur a mi, Andre." Also with a final six-page typed draft of the book, with a signed presentation: "A Paulette & Hector Deschamps. Andre," on typewriter quality paper and dated August 1944 to Sept. 1945 on the past page, one year before the book was actually published. Paulette and Hector Descomps were French medical doctors, Resistance fighters, and pioneers of the Medical Resistance and the Medical Committee of the Resistance. Frenaud served in the French Resistance movement and it was his bleak experiences during World War II, including two years as a prisoner of war, that inspired him to turn to writing poetry. His verses are characterized by their sense of futility, pessimism, and stoicism. A nice association copy!. Quarto: printed white wraps in original clear glassine dust jacket; 24 pages. With two original lithographs by Jean Bazaine.. Very Good (covers nice with minor wear; contents clean & tight). (Inventory #: 57528)
$1,500.00 add to cart or Buy Direct from Antic Hay Books
Share this item
Antic Hay Books
Offered by

LET US HAVE PEACE AND OTHER ADDRESSES

NY : Published By The Company , 1919
(click for more details about LET US HAVE PEACE AND OTHER ADDRESSES)
View all from this seller>