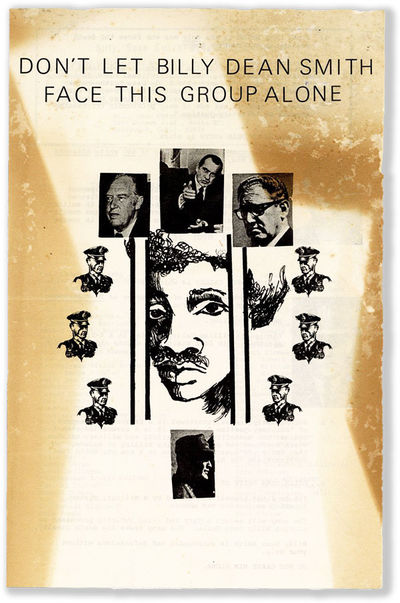 Smith (b. 1948), an African-American U.S. Army Private from Los Angeles, was imprisoned in 1971, accused of murdering two superior officers with a hand grenade while they slept (a practice known in military vernacular as "fragging"). This flyer, issued by Smith's defense team, accuses the Army of using Smith (who had faced previous disciplinary actions and was a vocal opponent of the Vietnam War) as a scapegoat for the many unsolved fragging cases in Vietnam, going on to state that Smith "...is the only man who faces the death penalty in our country today." The text contrasts Smith's alleged treatment with that of Lt. William Calley, a white officer, whose conviction following the My Lai Massacre resulted only in house arrest; and solicits funds to pay for Smith's defense. A list of contributors includes Shirley Chisholm, Ralph Abernathy, Ossie Davis, Jane Fonda, William Kunstler, Jessica Mitford, and many others. Smith was eventually acquitted. OCLC notes a single location (MSU). (Inventory #: 55113)
$75.00 add to cart or Buy Direct from
Lorne Bair Rare Books
Share this item

The Planetary and Stellar Worlds: A Popular Exposition of the Great Discoveries and Theories of Modern Astronomy. In a Series of Ten Lectures

New York : Baker & Scribner , 1848
(click for more details about The Planetary and Stellar Worlds: A Popular Exposition of the Great Discoveries and Theories of Modern Astronomy. In a Series of Ten Lectures)

London : Faber and Faber , 1956
(click for more details about Pincher Martin)
View all from this seller>