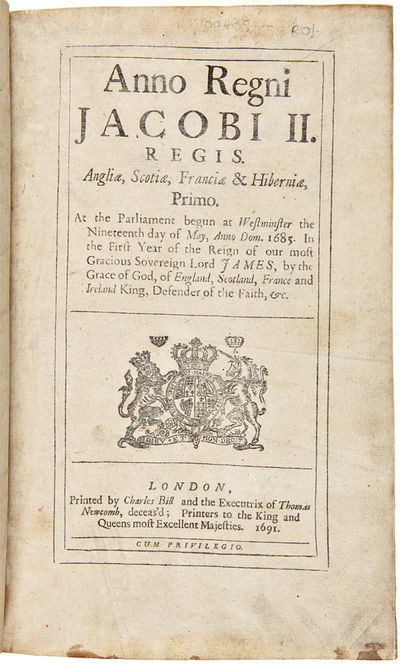 The English Bill of Rights was the culmination of the COUP D'ÉTAT known as the Glorious Revolution in which James II was deposed and William of Orange and his wife Mary (daughter of James II) were brought in to replace him. James II, a Catholic monarch, fathered a legitimate son in 1688, creating the possibility of a Catholic succession in Protestant England. James II had already ruffled quite a few feathers by trying to reestablish Catholicism, displacing Anglicanism as the only official church in England; he was also considered to be too pro- French and was highly autocratic. The leading Whig noblemen, joined by a few key members of the Tory party, called on William of Orange to lead an army from the Netherlands to claim the throne. James II fled England in December 1688, leaving the Protestant William and Mary to rule the kingdom jointly.

The "Act Declaring the Rights and Liberties of the Subject..." provides for several immutable political and civil rights, including the freedom from unilateral royal interference with the law, including the imposition of new taxes; freedom to petition the monarch; freedom of election of Parliamentary members, and freedom for those members to speak out freely and without reprisals while in Parliament; freedom for Protestants to bear arms; and freedom from a standing army in times of peace, requiring Parliament's consent to convene the army. It also specifically overturns several of the Acts passed by James II as unlawful and unjust.

Not only did the English Bill of Rights add to the rights set forth in the Magna Carta, it also established very clearly the order of succession to the reign of William and Mary. The throne would go to any of Mary's heirs or issue, thence to her sister Anne of Denmark, and finally to any of William's heirs by later marriages. It also specifically barred a Catholic from the throne, stating:

"Whereas it hath been found by experience, that it is inconsistent with the safety and welfare of this Protestant kingdom, to be governed by a Popish Prince, or by any King or Queen marrying a Papist...it may be enacted that all and every person and persons that is, are, or shall be reconciled to, or shall hold communion with the See or Church of Rome, or shall profess the Popish religion, or shall marry a Papist, shall be excluded, and be for ever uncapable to inherit, possess, or enjoy the Crown and government of this realm...."

The monarch was also now required to swear an oath to uphold the Protestant religion.

The enactment of this new set of laws was the beginning of modern-day British Parliamentary government, moving power out of the hands of the monarch and into those of Parliament and a ministerial system. The English Bill of Rights also served as a model for the founding documents of both the United States and Canada.

Some of the other Acts in the sammelband which led up to the passing of the Bill of Rights are of particular note, as well as key pieces of legislation in establishing the new relationship of the Crown, the Parliament, and the people:

"An Act for Removing and Preventing All Questions and Disputes Concerning the Assembling and Sitting of this Present Parliament." Feb. 23, [1689]. Passed just after Parliament passed the Declaration of Right on Feb. 13, which declared that the throne was vacant and thus free to be offered to William and Mary, this act declares the current Parliament is a valid body and its decisions, such as offering the throne to outsiders after ousting the King, are true and lawful.

"An Act for Establishing the Coronation Oath." April 9, 1689. A new coronation oath was needed in order to remove the absolute power from the hands of the monarchy. Under the new oath the monarch swears "to govern the people of this kingdom of England, and the dominions thereto belonging, according to the statutes in Parliament agreed on, and the laws and customs of the same." Under this new oath the monarchy was answerable to and bound by the laws passed by Parliament, rather than having free license to act on any tyrannical whim which may occur.

"An Act for the Abrogating of the Oaths of Supremacy and Allegiance, and Appointing Other Oaths." April 4, 1689. Negates legal loyalties to the previous sovereign, swearing fealty to the current rulers, William and Mary, and also swearing to "abhor, detest, and abjure as impious and heretical" the position that persons excommunicated or otherwise condemned by the Pope may be murdered by their subjects with impunity.

"An Act for the Better Securing the Government by Disarming Papists and Reputed Papists." May 11, 1689. Mandates the disarming of anyone subscribing to the Roman Catholic faith, removing from their possession "any Arms, Weapons, Gunpowder or Ammunition."

"An Act for Exempting Their Majesties Protestant Subjects, Dissenting from the Church of England, from the Penalties of Certain Laws." May 4, 1689. Though Catholics were not guaranteed freedom from persecution, this act did provide for the protection of other Protestant religions outside the Anglican church, such as the Quakers, who to this time had been heavily persecuted.

"An Act for Impowering Their Majesties to Commit without Bayl, Such Persons as They Shall Find Just Cause to Suspect Are Conspiring Against the Government." May 28, 1689. Empowers the monarchy to imprison persons suspected of treason, though the act notes that "nothing in this Act shall be construed to extend to the prejudice of the ancient Rights and Privileges of Parliament."

"An Act for the King and Queens Most Gracious, General, and Free Pardon." May 20, 1690. Having been on the throne for more than a year and feeling secure in their position, William and Mary issued this general pardon to their subjects who might have supported James II, with quite a few exceptions, including a list of thirty-one specific individuals (one of them already deceased).

The other acts in this volume cover a wide range of subjects. Some repeal previous acts passed by James II, while others govern trade or the military. One specifically provides for the "Rebuilding, Finishing and Adorning" of St. Paul's Cathedral in London. Another deals with the complete cessation of trade with France. At least half a dozen acts deal with the taxation on wine, beer, or spirits, and two with the taxation of tobacco.

GEMS OF ROCKY MOUNTAIN SCENERY, CONTAINING VIEWS ALONG AND NEAR THE UNION PACIFIC RAILROAD

New York : Published by the Author , 1869
(click for more details about GEMS OF ROCKY MOUNTAIN SCENERY, CONTAINING VIEWS ALONG AND NEAR THE UNION PACIFIC RAILROAD)
View all from this seller>