The Masque of Anarchy, to which is added, Queen Liberty; Song-To the Men of England 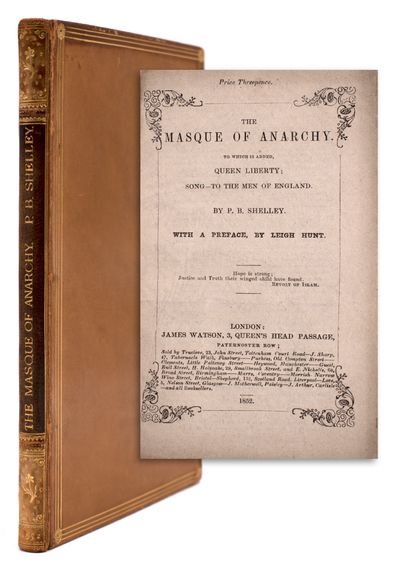 by Shelley, Percy Bysshe
London: James Watson, 1852. 24pp.; 34pp extra leaves for bulk. 12mo. Original wrappers bound in, triple ruled gilt polished calf with gilt decorated panels, vertical spine title, top edge gilt, and gilt dentelles. Some rubbing to edges, as usual with calf. Hunt, Leigh, preface. 24pp.; 34pp extra leaves for bulk. 12mo. "The greatest poem of Political Protest ever written in English" "The Masque of Anarchy" was written in twelve days in September 1819, one month after the Peterloo Affair, and sent to Leigh Hunt for publication in The Examiner, but remained unpublished until 1832 for fear of persecution. Mrs. Shelley writes that Shelley had in mind a series of poems that would bring to light the suffering of "the common people." The other two works published here, "Queen Liberty" ("A New National Anthem", first published in Poetical Works, 1839) and "Song-To the Men of England" (also published in Poetical Works, 1839) were written in the same burst of political outpouring, following the same colloquial ballad style as "The Masque of Anarchy," and that previously he hadn't used since 1812. OCLC locates only one copy, at UC Berkeley. Granniss 80 (First ed.); Holmes, R., Shelley, the Pursuit. London: Weidenfeld and Nicolson, 1974 (Inventory #: 323509)
$350.00 add to cart or Buy Direct from
James Cummins Bookseller
Share this item
James Cummins Bookseller Inc.
Offered by

Up From Slavery. An Autobiography

Garden City, New York : Sun Dial Press , 1937
(click for more details about Up From Slavery. An Autobiography)
View all from this seller>