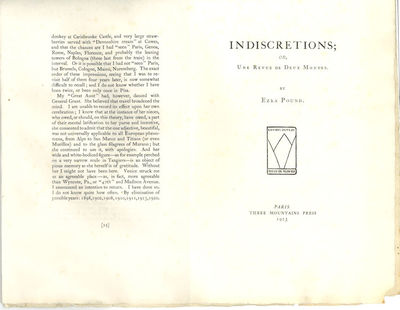 by [Three Mountains Press]: Pound, Ezra
Paris: Three Mountains Press, 1923. Untrimmed signature on recto and verso of single folio sheet of BFK Rives. Folded in quarters, a trace foxed, one side dustmarked, some fraying at untrimmed edges, good. A single never-bound sheet from the first edition of the first title in Pound's INQUEST series, limited to 300 copies, a significant number of which remained in this form, unbound and unnumbered, with the effects of William Bird, the publisher. This signature includes the half-title, title, dedication, and limitation pages, and pages 9 through 16. Page 9 is the first page of text, with the decorated drop title. The entire work consisted of three such sheets. A decent inexpensive sample of the work of one of the few expatriate English language presses of the 1920s that also fancied itself a fine press. GALLUP A23. (Inventory #: WRCLIT86022)
$65.00 add to cart or Buy Direct from
William Reese Co. - Literature
Share this item