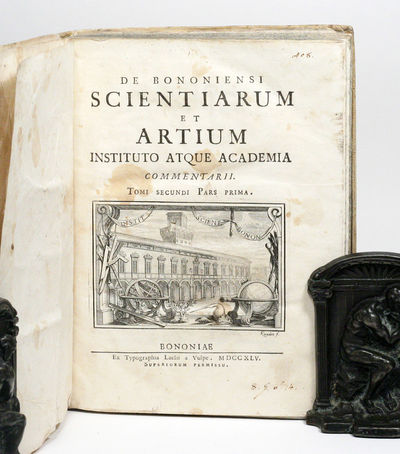 by BASSI, LAURA
Bologna: Bologna Academy of Science, 1745. First edition. Contemporary vellum. Very Good. FIRST PRINTING OF A RARE PUBLICATION DOCUMENTING THE "MOST IMPORTANT CONTRIBUTION TO PHYSICS" BY LAURA BASSI, THE FIRST WOMAN TO EARN A DOCTORATE IN SCIENCE. "In her native city of Bologna, Laura Bassi devoted a lifetime to physics and achieved institutional - as the first woman in Europe to officially hold a university teaching appointment - and international recognition unique to her time. She was the only surviving child of a Bolognese jurist who arranged for her traditional education. In contrast to her contemporary in Milan, Maria Gaetana Agnesi, who had childhood public appearances forced upon her by her father, the first public notice of Bassi occurred when she was twenty, after an academic examination by professors from the University of Bologna and the archbishop of Bologna, the future Pope Benedict XIV.

"As a result of her performance during this examination, Bassi became a public figure, and in 1732 ceremonies and disputations were held, along with the award of membership in the Academy of Sciences and the Ph.D. degree by the University of Bologna. Late in 1732 Bassi was given a paid position at the university and she presented her first lecture. Within a short time, she turned to science, and quickly decided to reject Descartes' philosophy in favor of the modern idea that the philosopher's task is 'to deduce the laws that govern nature from phenomena observed experimentally.'" (Extraordinary Women in Science, The Grolier Club, pp. 37-8.)

"In 1738 Bassi married Giovanni Giuseppe Veratti, a physician and also a professor at the university. Because, as a woman, Bassi was not allowed to teach at the university, she gave lectures and experimental demonstrations at her home.. In 1745 [Benedict XIV] reorganized the Bologna Academy of Sciences to create a special group of 25 scientists, called the Benedettini, who were expected to regularly present their research. Bassi lobbied Benedict XIV to become the 25th Benedettini. For a woman to be awarded such an honour was particularly controversial, so Benedict XIV compromised and named Bassi to the Benedettini but without the same voting privileges as the other 24." (Erik Gregerson, Britannica).

"Although Bassi frequently lectured, she published very little." (Grolier). The present paper "De aeris compressione" is an account of her work that was printed in the journal of the Bologna Academy of Sciences in 1745, the year she became a member of the Benedettini. It deals "with deviations from Boyle's law, which states that the product of the volume of a gas and the pressure it exerts on a container, at constant temperature, is a constant. Doubts had appeared as to the general validity of the law. Domenico Galeazzi in 1732, while testing deviations in the Amontonian thermometer, which was based on Boyle's law, found that its deviations were caused by variations in the elasticity of the air. Bassi not only repeated the experiments in which the elasticity of the air was studied at different pressures and temperatures but also made new investigations using air taken in days that varied from being very humid to being dry. While she found that the relationship between volume and pressure established by Boyle's law was approached on dry days, it broke down on humid days. On humid days, Bassi could not contract the air to half the volume by doubling the pressure; this led her to ask whether it was possible that 'humours' in the air affected its elasticity and therefore the results. Eventually, she concluded that the relationship between volume and pressure established by Boyle's law was not universally applicable. This was well before scientists had a detailed understanding of the behavior of vapor under pressure. The experiments were considered important enough to her Bolognese contemporaries that the institute's secretary published a summary of her results before the experiments were finished. A eulogy on her death pronounced them her most important contribution to physics." (Gabriella Berti Logan, "The Desire to Contribute: An Eighteenth-Century Italian Woman of Science", in The American Heritage Historical Review, Vol. 99, No. 3).

Note: Although the paper (pp. 347-53) is often cited as written by Bassi, it is, rather, a detailed account of her work published by the Bologna Academy (she is referred to in the article in the third person as "Laura") and presumably written by another member (or members) of the Academy. Bassi, interestingly, is also cited on p. 154 of the volume, where her background and marriage is briefly discussed and she is referred to as "highly educated" ("doctissimae").

Photograph of Virginia Woolf with Her Father

London : George Charles Beresford , 1902
(click for more details about Photograph of Virginia Woolf with Her Father)
View all from this seller>