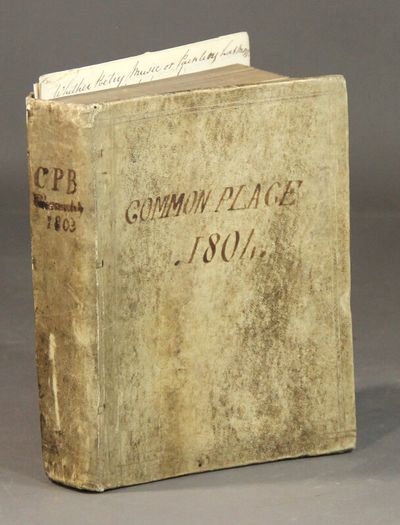 by Cunningham, Francis
Scotland [?], 1813. Small 4to, pp. [148] plus about 100 blank pages; 16 pages of manuscript material laid in; parchment over boards, blind ruled boards, title and date in manuscript on cover and spine, armorial bookplate of Francis Cunningham on pastedown; boards toned, textblock clean and sound, very good. A commonplace book for a civically minded man, a volume with extensive prose summaries and not one piece of poetry. The content of the book is split relatively evenly among issues of politics, history, civics, etc. Cunningham appears to have had some interest in Irish matters, as he includes information on land issues there, particularly the problem of middlemen. He summarizes the pros and cons for debates on immigration, the value of "great towns" ("Agriculture is the sole stay and real wealth of an Empire, and great towns do not forward agriculture") and the test act. He also dedicates multiple pages to Masonry, covering Anti-Christian/monarchal conspiracies, illuminism, conspiracies, rites, and degrees. In addition to politics and civics Cunningham had an interest in art and aesthetic philosophy, particularly in the definition and comparison of certain aesthetic principles. The last two entries of his commonplace book appear to be drafts and notes on personal projects. The first is "Enquiries respecting the state of Ireland gathered from various books & persons to be the subjects of my investigation on my promised journey in 1813." The second is a draft of a talk titled "Whether poetry music or painting has most influence on the passions... to have been spoken at the Club in Feb. 1804." Both entries are accompanied by further drafts and notes on paper laid in, consisting of 16 pages. Other sections concern toleration, languages, deciphering, knowledge of God, human understanding, tragedy, poetry, passion, poor laws, the character of Columbus, the incentive of gold, Botany Bay, standing armies, national character, Scotland, and his own family of Cunningham; many are extracted from authors such as Samuel Johnson, Dugdale Stewart, James Beattie, Jean D'Alembert, and Samuel Pegge, among others. Many entries are unsigned, and some are signed "F.C." so likely these are original compositions. Francis Cunningham does not appear to be well known to history. Genealogical notes on the lower pastedown may give some hints as to his place in the Cunningham clan but they do not immediately solve the problem. The bookplate with the motto "Over / Fork / Over" identifies this as one of the many branches of the Scottish Cunningham clan, but which one, exactly, is not yet known. According to ScotsConnection.com this surname is territorial and found in Ayrshire. (Inventory #: 57845)
$862.50 add to cart or Buy Direct from
rulon-miller books
Share this item

Report of the Board of Commissioners representing the state of New York at the Cotton States and International Exposition held at Atlanta, Georgia 1895

Albany and New York : Wynkoop Halenbeck Crawford Co , 1896
(click for more details about Report of the Board of Commissioners representing the state of New York at the Cotton States and International Exposition held at Atlanta, Georgia 1895)
View all from this seller>