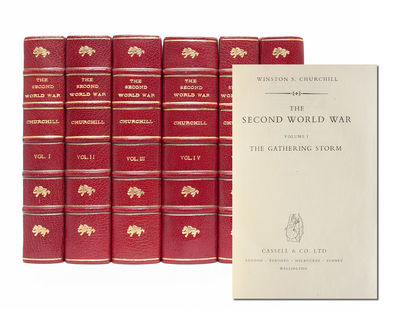 by Churchill, Winston
London: Cassell and Co. Ltd, 1954. First editions. Near Fine. A lovely set bound in half morocco over marbled boards, with gilt spines and raised bands. Buff endpapers. Complete with all half-titles and all maps. In Near Fine condition overall with some fading and spotting to the top-stains. The six volume classic includes: The Gathering Storm; Their Finest Hour; The Grant Alliance; The Hinge of Fate; Closing the Ring; and Triumph and Tragedy.

Churchill's immensely popular history of The Second World War. Churchill's work is, unsurprisingly, mostly focused on the British perspective of the conflict - and the book is as much memoir as it is history. Churchill was already a well regarded and popular writer when he ascended to the Prime Ministership in 1940, and he made no secret of his intention to one day write a history of the conflict which was only then beginning. "I will leave judgments on this matter [World War 2] to history, but I will be one of the historians." Interestingly enough, Churchill was permitted by Clement Atlee and the Labour government - which had come to office in 1945 - to be allowed access to many of the government archives, in order to help furnish his narrative. (Though he was not allowed to reveal any official government secrets.) The book was a bestseller, and would make Churchill - for the first time in his life - a truly wealthy man. It is also the work that supposedly secured him the Nobel Prize for Literature. "So with Triumph and Tragedy end the Memoirs of the Second World War by Winston S. Churchill, a gigantic contribution to history by a historical giant..." (Contemporary New York Times review). Near Fine. (Inventory #: 4453)
$2,950.00 add to cart or Buy Direct from
Whitmore Rare Books
Share this item

New York : Charles Scribner's Sons , 1938
(click for more details about The Yearling)
View all from this seller>