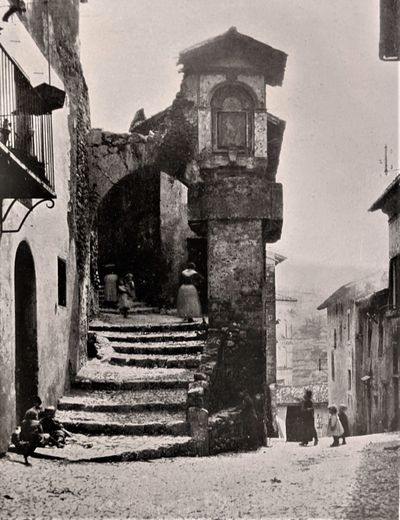 by Hooker, Marian O.
New York: Architectural Book Publishing Co., Inc, 1925. Folio.  310 x 240 mm., [12 x 9 ¼ inches].  13 pp. text.  Illustrated with a frontispiece and 126 photogravures.  Original gray cloth, decorated with the title in blue; dust jacket, with a chip at the head of the spine.  Very good copy.
Rare and attractive architectural history of the provinces of Abruzzi, Apulia, Basilicata, Campania, and Lazio.  Photos taken over many years by the intrepid traveler, Marian Hooker, whose interest in the by-ways of the Italian South contrasted with the major productions documenting the major cities of the North.  In the preface written by Katherine Hooker, Marian's mother and author of several books on Italy, writes, "a journey to the south-eastern portion [of Italy] is not so easy or so often taken, though it affords the traveler an interesting and surprising field in which to trace the racial records that survive in its architecture."  The book also includes an appreciation by Myron Hunt of the Allied Architects Association of Los Angeles.
Marian Hooker was a physician who was educated at University of California and photographer who was and good friend of John Muir.  Among her many accomplishments she was the first woman to climb Mount Whitney, a mountain named after her great uncle, the geologist Josiah D. Whitney. . (Inventory #: 921)
$225.11 add to cart Available from
De Simone Company
Share this item
De Simone Company, Booksellers
Offered by

London : Chatto and Wndus , 1878
(click for more details about North Italian Folks. Sketches of Town and Country Life)
View all from this seller>