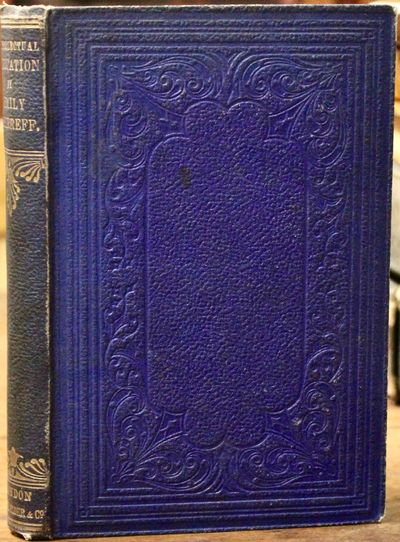 by Shirreff, Emily.
London: Smith, Elder and Co., 1862 Second edition. With a new preface by Shirreff in which she defends her strategy for the education of girls from the criticism that the recommended lessons (in Greek, Latin, arithmetic, history, and more) were too challenging for the average girl (pp. iii-v). The work also includes guides on time management and a chapter on "Some Peculiarities of Woman's Social Position" including the need to compete with men and the challenges of securing employment and further education (pp. 255-276). Note that the work otherwise contains "no alterations" to the rest of the text (p. iii).. Publisher's purple cloth stamped decoratively in blind, gilt-lettered spine, yellow endpapers. Octavo. Spine somewhat toned. Binding a little loose. Contemporary pencil signature to front free endpaper. A bit of light foxing. A very good, clean copy. Emily Shirreff (1814 - 1897) was a suffragist, opponent of slavery, and pioneering educator. In 1871, she and her sister Maria Grey (1816 – 1906, founded the Women's Education Union. She also served for one year as the second principal of Emily Davies' Women's College, which is now Girton College at Cambridge. Shirreff was also an early proponent of Froebelian education in England. She helped establish Frobel Society, lecturing and writing extensively on the kindergarten system, and served as its president from 1876 to her death. Sherriff's other works included Letters from Spain and Barbary (1835/36) and a novel, Passion and Principle (1841), both written with her sister. The two also collaborated on Thoughts on Self-Culture, Addressed to Women (1850), in which they argued that defective education and inactive lives were the main reasons for women's lack of power and that marriage is not essential to women's "happiness…and self-respect" (Thoughts on Self-Culture, p. 14). (Inventory #: 17069)
$1,500.00 add to cart or Buy Direct from
Michael R. Thompson Rare Books
Share this item
Michael R. Thompson Rare Books
Offered by

The Yellow Barn Press. A History and Bibliography