Passages From the Remembrancer of Christopher Marshall, Member of the Committee of Observation and Inspection, of the Provincial Conference, and of the Council of Safety 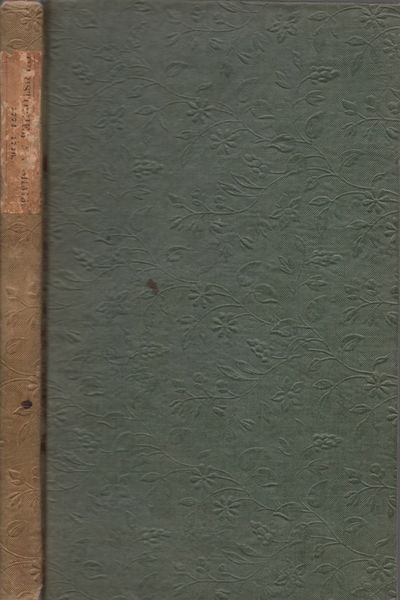 by Marshall, Christopher; Duane, William Jr. (edited by)
Philadelphia: Printed by James Crissy, 1839. First Edition. Hardcover. Good. 12mo. [1], 124 pages, xvi appendix, errata slip, [1]. Green cloth hardcover with imprinted floral designs on the covers. Partially faded paper title label on the spine. A couple of spots to the green cloth. Light to moderate scattered foxing to the contents. The contents of this book are written in diary fashion and cover the years 1774-1776 in the Philadelphia area. Much content on the American Revolution is provided. From the Historical Society of Pennsylvania:

Christopher Marshall was born in Dublin, Ireland, on November 6, 1709. He was educated in England and sailed to America sometime in the late 1720s. By 1729, he had established a pharmacy shop in Philadelphia, Pennsylvania. He married Sarah Thompson (1702-1771) in 1736 and the couple had three surviving sons. A few years after Sarah's death, in 1774, he married again, this time to Abigail Fisher Cooper (1721- 1782). His success as a pharmacist and chemist allowed him to retire from business in 1774, but he remained a vital public figure. In 1776, he became a delegate to the Philadelphia Provincial Council, and he was twice appointed to the Continental Committee of Council and Safety. His retirement afforded him the time to keep diaries of public and personal events. He wrote these "remembrances" almost daily from about 1774 to at least 1795. Marshall was a devout member of the Society of Friends, although he was eventually excommunicated from the Society. According to the minutes of the Philadelphia Monthly Meeting, in 1751, he was disowned by the Society for counterfeiting money. Later in life, he apparently supported the American cause for independence from the British. In 1777, Marshall relocated to Lancaster, Pennsylvania, to improve his health and avoid the British armies. After hostilities ceased, Marshall moved back to Philadelphia where he died on May 7, 1797. (Inventory #: 24889)
$150.00 add to cart or Buy Direct from Americana Books
Share this item

Days Gone By in Alpharetta and Roswell Georgia

Urbana and Chicago : University of Illinois Press , 1970
(click for more details about The Expeditions of John Charles Fremont Volume 1 Travels from 1838 to 1844)
View all from this seller>