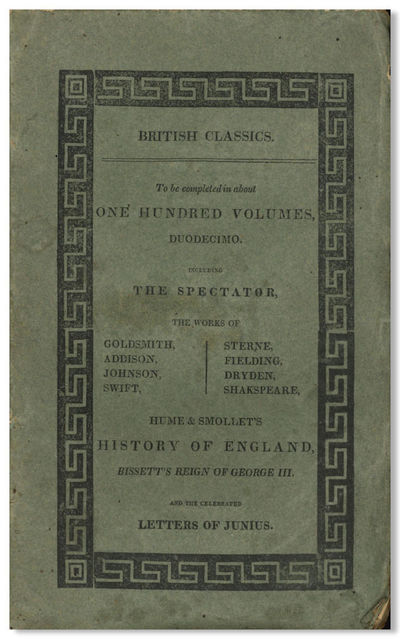 by Swift, Jonathan
New York: Published by William Durell and Co., 1813. Fifteen volumes (of twenty-four). Octavo. Original printed wrappers, fore and bottom edges untrimmed. Portrait and frontis in second volume. Scattered foxing, three volumes (including the first) have large chips from the spine ends, there's early ink name in each volume, there are occasional small nicks, chips and spots to some wrappers, still an unusually good lot in original state. Published in the uniform printed wrapper of Durrell and Co's "British Classics," projected "To be completed in about One Hundred Volumes ...," and including works by Goldsmith, Addison, Johnson, Sterne, Fielding, Dryden, Shakespeare, Hume, Smollett & Swift. Several of the volumes have the remnants of printed spine labels applied by the publisher over the generic "British Classics / Volume [__]" to identify the volumes as from the Swift component of the series. The early owner has neatly noted the content of each volume toward the crowns of the spines. Here present are volumes 1 - 3, 11, 13, 15 - 24. The text is Sheridan's, as revised and corrected by John Nichols. While this set (and odd volumes of same) are not particularly uncommon rebound in calf or cloth, copies of the volumes in this original state in printed wrappers are uncommon. TEERINK 132. SHAW & SHOEMAKER 26839 & 29904. OCLC: 2872033. (Inventory #: WRCLIT86065)
$450.00 add to cart or Buy Direct from
William Reese Co. - Literature
Share this item