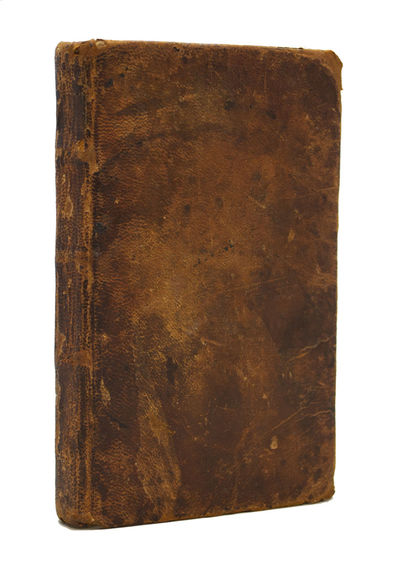 by BOUDIET DE VILLEMERT, P.J.
Rare Second American Edition and Earliest Attainable of the First Title Devoted to Women Printed in the Colonies [BOUDIET DE VILLEMERT, P.J.]. The Ladies Friend; being a treatise on the virtues and qualifications which are the brightest ornaments of the fair sex, and render them most agreeable to the sensible part of mankind. Philadelphia: Printed and Sold by R Aitken 1781 Second American translation of Pierre-Joseph Boudier de Villemert's book "Ami des femmes" first published anonymously in Paris in 1758. And first Aitken edition, proceeded by the 1771 John Dunlap issue. This current edition has 22 pages more than the Dunlap edition. This Aitken edition was printed the same year he began work on his bible. The Aitken Bible was the first complete English Bible printed in America. Twelvemo (5 1/8 x 3 inches; 130 x75 mm). 103, [1, table], [3, publisher's ads], [1, blank] pp. Without front free-endpaper. We could find no copies of this edition or the 1771 edition at auction. Full contemporary calf. Boards a bit rubbed. Some worming to top margin of first two leaves, not affecting text. Previous owner's contemporary ink ownership inscriptions on endpapers and title-page. Occasional marginal closed tears, with no loss of text. Overall a very good copy. Chapters in this book include State of Women in Society, Of the Studies fit for Women, Of Women's Occupations, Of Diversions, Of the Luxury of Women, Of Women's Dress, Of the Temper and Disposition of Women, Of Love and Gallantry, Of Marriage, Education of Children, and Virtues of Women. First book devoted entirelyto women and printed in the colonies. A search of the American Antiquarian Society and Evans imprints list no other earlier title under the similar subject than the 1771 Dunlap edition. According to the Library of Congress, "Early works on women's role in society... include the first American printings of popular foreign titles... Pierre Joseph Boudier de Villemert's The Ladies Friend (Philadelphia: John Dunlap, 1771; encourages women to study the arts, literature, and history." ESTC W19378. Bristol B5245. Shipton & Mooney 43947, 43986. HBS 68539. $7,500 (Inventory #: 68539)
$7,500.00 add to cart Available from
Heritage Book Shop
Share this item