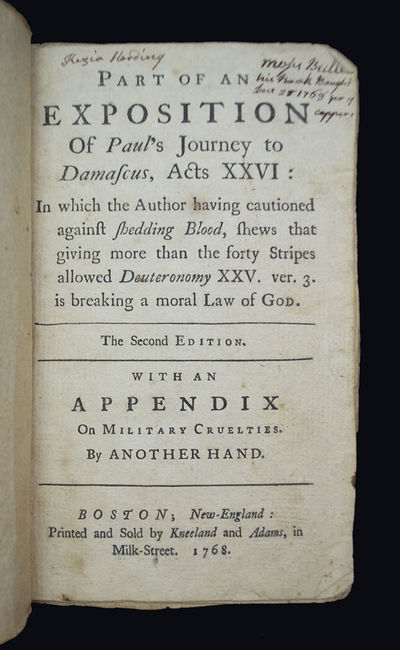 by CROSWELL, Andrew
Second and Best Expanded Edition [Croswell, Andrew]. Part of an Exposition of Paul's Journey to Damascus, Acts XXVI: in which the author having cautioned against shedding blood, shews that giving more than the forty stripes allowed Deuteronomy XXV. ver. 3. is breaking a moral law of God. The second edition. With an appendix on military cruelties. By another hand. Boston; New-England: Printed and sold by Kneeland and Adams in Milk-Street 1768 Second and best edition. Printed the same year as the first edition, and with the expanded 6-page Appendix. Twelevemo (6 1/2 x 4 1/8 inches; 165 x 105 mm). 11, [1, blank], 6 pp. Lacking the final blank after the appendix. Authorship attributed to Andrew Croswell by Evans. We could find no copies at auction. Early American pamphlet, bound in contemporary wrappers. Front wrapper with some light wear and soiling. Back wrapper torn, lacking top and bottom corners. Previous owner's contemporary ink ownership inscription dated 1768 on title-page and first page of the Appendix. Leaves a bit toned, but overall a very good copy. "A scarce work on American military discipline, which condemns flogging then so prevalent in the British American army. Several cases of exceptional cruelty are cited. This second edition is evidently the sheets of the first (Evans 10870) with an added Appendix by another hand, 6 pages. The author of the latter says: 'If any person has a mind to see a representation of hell, let him attend upon this part of the discipline of the Army'; also, 'I think it would be well if all masters of families would caution their children and servants against being present at these bloody executions.'" (Lathrop Harper). Andrew Croswell was a Congregational minister and revivalist, was born in Charlestown, Massachusetts... He trained for the ministry at Harvard, receiving a B.A. in 1728 and an M.A. in 1731. He was called to the Second Church of Groton, Connecticut, in 1736, and there he was drawn into the emergent world of evangelical Protestantism... Croswell was drawn further into the revivalist fold after the New England swing of the heralded English evangelist George Whitefield in 1740. As controversy began to mount around the practices of itinerants like Whitefield and his host of colonial imitators, Croswell rose to the defense of the new evangelism in his first published tract, 'An Answer to the Rev. Mr. Garden's Three First Letters to the Rev. Mr. Whitefield' (1741)... Croswell continued his defense of the revivals in one pamphlet after another in the 1740s...Notwithstanding the crumbling of his ministry during the years of the American Revolution, Croswell had been a crucial player in the advent and perpetuation of the evangelical movement in New England, especially in its radical separatist form. He helped legitimize new patterns of ministry and evangelism that pointed ahead to the democratic ferment in the religious world of the early republic. He also helped provide theological articulation for an evangelical piety of dramatic new birth and full assurance, pushing aside Puritan anxiety and pilgrimage and pointing ahead to the world of nineteenth-century revivalists like Charles Grandison Finney who similarly saw little place for Puritan doubt in evangelical spirituality. Few other radicals matched Croswell's polemical output or were such consistent gadflies of New England's standing order." (American National Biography). Evans, 10871. Early American imprints. First series; no. 10870. ESTC W2469. HBS 68541. $1,000 (Inventory #: 68541)
$1,000.00 add to cart Available from
Heritage Book Shop
Share this item