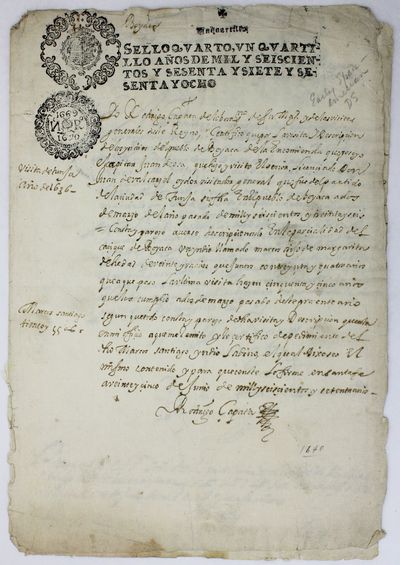 by [Colombia]. [Native Americans]
[Boyaca, 1670. About very good.. [2]pp., on a bifolium. Some wear at edges, separation along fold from lower corner. Light toning and dust soiling. Accomplished in two legible hands. A fascinating and rare manuscript document that records the ongoing efforts of the Spanish colonial bureaucracy to enumerate and track the indigenous population of New Granada during the 17th century. The present declaration, dated June 25, 1670, follows up a census that occurred in 1636, and confirms that a "Spanish-speaking Indian" named Marco Santiago still resides in the rural town of Boyacá, north of present-day Bogotá. The magistrate, named Rodrigo Zapata, certifies the details of his identifications, and writes, in translation:

"The cacique of Boyaca is described as an Indian named Marco, son of Margarita, who was twenty-one years old [in 1636]. These twenty-one, plus the thirty-four years that have passed since the last visit, equal fifty-five years, which were completed on March 2 of this year. All of which is in accord with and appears from the visit and description that is included in the file that was sent to me. I certify the above at the request of the aforesaid Marco Santiago, a Spanish-speaking Indian, who said he is the same man as is the above."

The second page of manuscript provides more bureaucratic certification of the statement. Very interesting evidence of the census of natives in Spanish South America during the 17th century. (Inventory #: 2245)
$950.00 add to cart Available from
McBride Rare Books
Share this item

How to Grow and Use. The Grape in Kansas

Topeka : Issued by the State , 1901
(click for more details about How to Grow and Use. The Grape in Kansas)
View all from this seller>