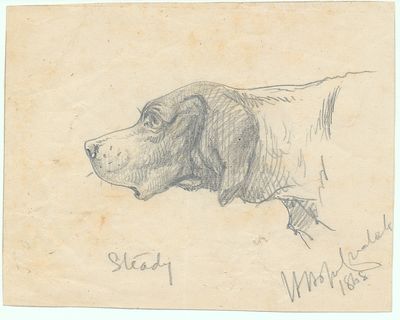 by CREALOCK, HENRY HOPE
The group of drawings include a bust length sketch of a dog rendered in pencil, with the caption, (or the dog's name) "Steady," signed and dated, " H. H. Crealock 1868." Accompanying this dog is a smaller furry canine, bust length, similarly signed with date, "68." A third signed sketch shows a man with cap or tam in profile, signed with initials, "HHC." Included also is a sketch in another hand of a castle dated, "Aug. 1868," and a faded period photo titled on verso, "Argilla Road." Condition: Overall good with light soiling and foxing on on the three signed sketches, one with bent upper corner visible in image. Autograph (Inventory #: 4805)
$375.00 add to cart or Buy Direct from
Schulson Autographs
Share this item


(click for more details about Ginsberg photographed at a party, ca 1970,)
View all from this seller>